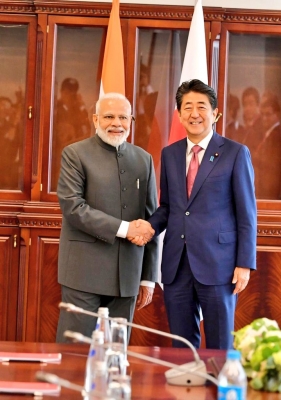 In a press conference, Foreign Secretary Vijay Gokhale announced the takeaways from these bilaterals which reinforced a robust global partnership.

Modi met his Japanese counterpart Shinzo Abe on the margins of 5th EEF as the two discussed deepening multi-faceted ties in economic, defence and security, start-up and 5G areas and exchanged views on regional situation. The two leaders are known to share a personal bond.

During his bilateral meeting with his Malaysian counterpart Mahathir Mohamad in Vladivostok, Modi raised the issue of extradition of Zakir Naik. Both sides have decided to take the talks forward, said Foreign Secretary Vijay Gokhale.

Modi also explained to the Malaysian leader the reasons behind the abrogation of Article 370 in Jammu and Kashmir, Gokhale said.

India also held bilaterals with Mangolia on a wide ranging issues, in which sources said again India’s stand on the abrogation of Article 370 in Jammu and Kashmir was reiterated.

Modi is on a two-day visit to Russia. On Wednesday he held bilaterals with Russian PM Putin and on Thursday he will attend the Eastern Economic Forum where he is the chief guest.