Climate change is known to trigger a number of effects on Human settlement. One of the major concerns in not-so distant future can be threat to our food security.

A few countries like India, already hosts greater numbers of poor, those barely have access to minimum diet required for subsistence.

The Multidimensional Poverty Index (MPI) measures the complexities of poor people’s lives, individually as well as collectively each year across the globe.

While in 2019, the Global Multidimensional Poverty Index reported India to have lifted 271 million citizens out of poverty between the time period 2006 and 2016.

But with the advent of Pandemic in 2020, a contrast to this was observed: the highest global poverty increase happened in India.

India is yet to accomplish food security for its people.

It stumbled upon 71st rank along with Guatemala in the Global Food Security Index 2020 and at 94th out of 117 countries, faring behind Bangladesh, Pakistan and Nepal Global Hunger Index 2020.

According to a new research, one-third of global food production in under critical risk by the century end, if greenhouse gas emissions continue to register unbated growth at this current rate.

This will happen as many food bowls of the world will see temperature and precipitation variations, making it difficult for vegetation to survive if temperatures rise by about 3.7C.

Researchers from Aalto University in Finland involved with the study, have concluded that about 95% of current crop production takes place in areas categorized as “safe climatic space”, or conditions where temperature, rainfall and aridity fall within certain limits.

An associate professor at the University explained: “A third of global food production will be at risk. We should be worried, as the climate safe space is quite narrow. But there are measures we can take in reducing greenhouse gas emissions.

And we should empower people and societies in the danger zones, to reduce the impact and increase their resilience and adaptive capacity.”

The paper got published in the journal One Earth this month.

But if the temperatures arise, these potential safe areas would shrink drastically. It will affect south and south-eastern Asia and Africa’s Sudano-Sahelian zone. 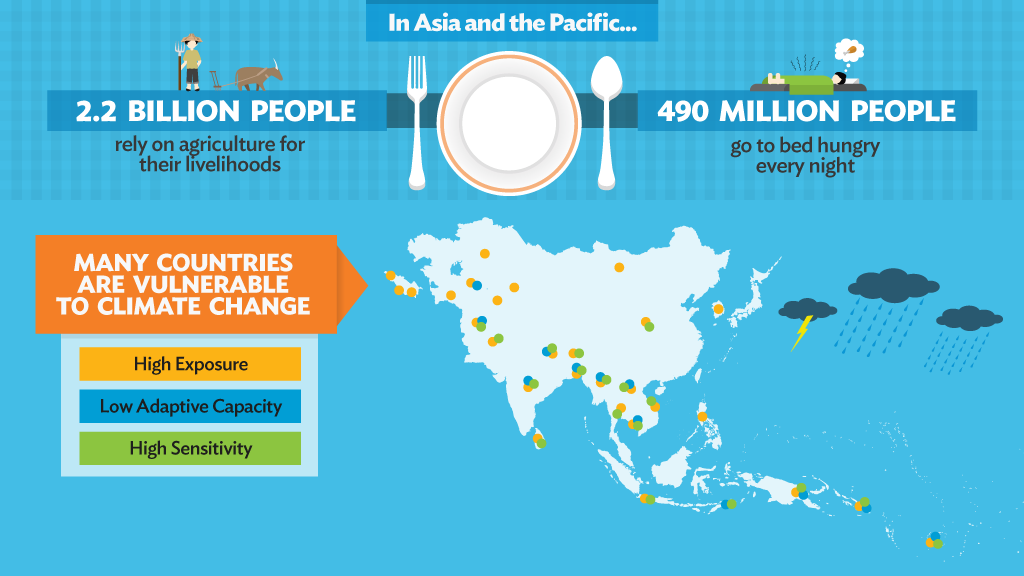 Can our Food Production be saved if temperatures stabilize?

The report illustrates that if greenhouse gases are reduced such that the world fulfils the goals of the Paris agreement i.e. limiting the temperature rise to 1.5C or 2C above pre-industrial levels, only in that case risk to our food systems can be contained to 5-8%.

‘Food production as we know it developed under a fairly stable climate, during a period of slow warming that followed the last ice age. The continuous growth of greenhouse gas emissions may create new conditions, and food crop and livestock production just won’t have enough time to adapt,‘ explains the main author of the publication.

Therefore, two future scenarios for climate change have been used in the study: one in which carbon dioxide emissions are cut radically, limiting global warming to 1.5-2 degrees Celsius, and another in which emissions continue growing unhalted.

The results have illustrated that Climate change threats affect different countries and continents in different ways. In 52 of the 177 countries studied, the entire food production would remain in the safe climatic space in the future.

However, the rising temperatures may increase food production in some areas currently being less productive, such as the Nordic regions.

These may cater to the demand nearby but will not suffice to offset the loss of prominent important food producing regions of the World.

“There will be winners as well as losers, but the wins will be outweighed by the losses, and there is just not enough space for food production to move – we are already at the limits”.

Livestock farming and associated production will fall terribly as changing warmth has been indicated to change fertility and sex selection ratio in some animals.

The researchers examined the impacts of climatic changes on 27 of the most important food crops and seven types of livestock. Across the world water scarcity will be observed especially in Indian where the Composite Water Index by Niti Aayog has highlighted upcoming water crisis in most Indian cities and districts.

This may provide a requisite to land degradation and consequently, 1.5m sq miles (4m sq km) of new desert will be added globally.

Expert says: “If we let emissions grow, the increase in desert areas is especially troubling because in these conditions barely anything can grow without irrigation. By the end of this century, we could see more than 4 million square kilometres of new desert around the globe”.

Even under strenuous limiting to 1.5-2 degree C of warming, the boreal forests of northern America, Russia and Europe would probably shrink from their current 7m sq miles to about 6m sq miles by 2100.

Unless in a high emissions scenario, only 3m sq miles of these forests may remain alive, which are a source of greater inputs in trade and agriculture for the area and around.

This can indirectly hamper further Industrial production and may even be responsible for Stagflation due to lack of any critical input.

Arctic tundra, the most fragile region of the world and only home to many species thriving in cold, would be even worse off. It is estimated to disappear completely if climate change is not reined in.

Away from poles, the tropical dry forest and tropical desert zones are estimated to grow significantly.

What can we infer from this grave upcoming situation of Uncertainty?

While we understand that this study has drawn out a holistic approach to the impacts of Climate change to ever-vulnerable food systems of the World.

We must ensure that while we adapt to the changes and mitigate its dangers by limiting Anthropogenic activities increasing Global warming and Climate changes, we must also strengthen the resilience of our current food systems which may fall prey to the perils of Nature.

Its about equality, about Hunger. Surely, we cannot dare to leave the vulnerable behind. Because if we don’t start balancing things out, Mother Nature will.

All about Seaweed: The Unknown Facets of its potential, recent trends, products and profits
How to sustain when India’s staple wheat and rice begin to lose its nutrients?