Android seems to have figured out everything an OS should except the audio. Google has worked for years slowing fixing the round-trip latency problem, nevertheless, OEMs don’t seem to address the issue. Moreover, Android, the world’s most popular OS, does not seem to be addressing the issue with wireless headphones. Bluetooth audio adoption is witnessing its growth rapidly but long latencies prevent Bluetooth headphones from being suitable for real-time use cases. This issue includes video calls, streaming videos, and playing games.

For the unaware, latency is the little delay that happens when users witness between pressing pause and the music actually stopping. Or between seeing an opponent appear in front of users and only then hearing their footsteps in PUBG Mobile. Long latency turns out to be inconvenient at best and at worst it can be a disaster. Ideally, latency should be below 20ms in order for users to not to hear it. It is quite difficult to notice between 40ms and 80ms, however, once it rises up to 150ms it can be distractive at best.

Bluetooth devices are expected to lag more often because of the extra wireless transmission and audio packaging delay. The issue doubles itself in Android because of the complex audio chains and the fact that some manufacturers are notably worse than others in addressing this issue.

In order to test latencies on current Android devices, Android Authority conducted a test by grabbing “a range of handsets, a Bluetooth receiver with support for all of today’s Bluetooth codecs, and a Teensy LC microcontroller to use with Google’s WALT latency testing app.” They ran 100 tests on each handset for each Bluetooth codec, producing a result of 2,800 data points.

There are a lot of variations between handsets and codecs, noted Android Authority. In the test, Google Pixel 3 XL offers the lowest latency overall and also the smallest variation between test runs. OnePlus T followed the same produced similar results, however, at a stake of variance with AAC, SBC, and aptX HD. The latency of these phones varied from 244ms and 250ms respectively, which is not good enough for real-time use. 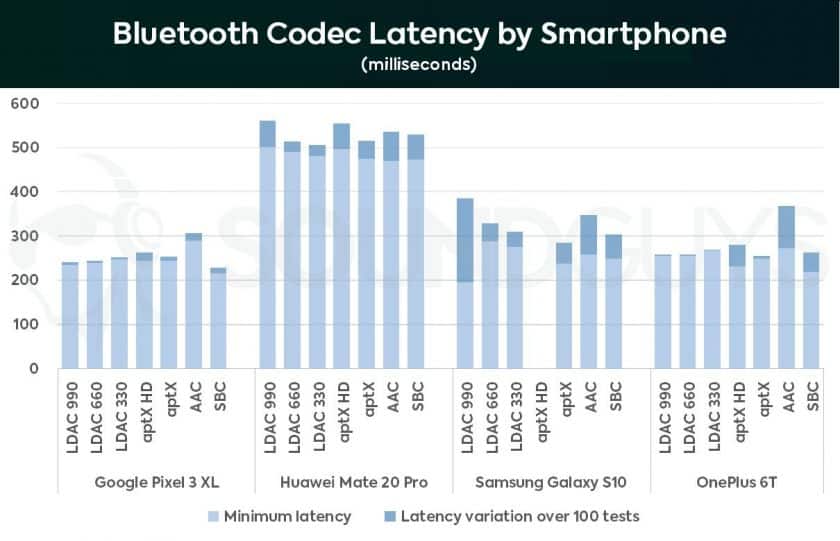 With the Huawei Mate 20 Pro, the aforementioned Android software issue persists, with an average of staggering 484ms in Bluetooth latency. It also shows considerable variance in Bluetooth latency, averaging 47ms between its fastest and slowest delay. The Samsung Galaxy S10 offers better results, however, showcases a lack of consistency in its Bluetooth latency.

“The explanation for these differences harkens back to the Android audio chain discussed earlier. There’s no way to enforce the use of the lower latency AAudio API over the more variable OpenSL ES APIs. The ALSA drivers, audio and Bluetooth HAL, and AudioFlinger buffer sizes are all variables depending on how the OEM implements them in its version of Android. Furthermore, aggressive CPU gating can require even longer buffers too. The bottom line is that Android does not offer a fast-track, low-latency audio path that is guaranteed to work on all phones,” noted the website.

Since Google and other brands are looking forward to prevailing wireless future, they need to put serious attention on the Bluetooth latency issue. This not only includes music quality but also matching the user experience for calls, films, and gaming. Bluetooth standards need to work on this issue along with the OEMs and Android.