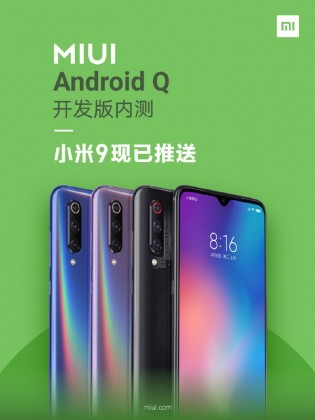 Xiaomi has started pushing Android Q development update to Xiaomi Mi 9 and Redmi K20 Pro, they confirmed Weibo Post . The company had recently launched closed Beta with limited accessibility for the Mi 9, But now the company starts pushing the open Beta update to Mi 9 and Redmi K20 beta testers. The official MIUI post reads (translated), “Xiaomi 9, Redmi K20 Pro development version of the beta has now pushed Android Q upgrade for the brave teenagers”. Basically, they are giving a soft warning before installing this update. The new update is likely to be based on Android Q Beta 6 recently released by Google.

Here are the lists of known issues you might encounter with the Android Q Beta build :

Since it is a development version, you might experience some bugs and stability issues, So it is not advisable to upgrade your primary device unless you are too curious to explore new things. However, the company didn’t clarify whether it is based on MIUI 10 or MIUI 11, but most probably it would be using the MIUI 10 without any visible changes in UI. Furthermore, if you didn’t get any update, you can flash it manually by using the officially recommended method.