Ferrari Roma has launched in India priced at ₹3.61 Crores onwards (ex-showroom). According to Ferrari, it is based on the Portofino which is not at all recognizable as it looks more of a 365 GTC/4. However, customers can visit the Delhi and Mumbai dealership to book this supercar. While, Ferrari will start delivering the Roma from next year.

Coming from the family of engines that has won the International Engine of the Year award many times, the Ferrari Roma gets a 3.9-litre V8 engine. This particular engine is a 385cc twin-turbocharged V8 unit that produces a massive 620BHP of power with a peak torque of 760Nm. Meanwhile, Ferrari Roma with this engine can do a 0-100kmph in just 3.4 seconds. And it takes only 8.5 seconds for 0-200kmph.

The transmission duties of this supercar works under an 8-speed DCT gearbox.

Inside the cabin of the Ferrari Roma, the supercar gets three screens. The first one is a 16-inch instrument cluster, the other one being an 8.4-inch infotainment system while the third one remains for the co-passenger. The all-new Ferrari Roma comes with a 2+2 seating layout. Meanwhile, the new steering on the Ferrari Roma is easy to manoeuvre with lots of control switches on it.

Ferrari Roma has got no direct rival. But the supercar as per the looks rivals the Aston Martin Vantage. Meanwhile, the other rivals based on performance are Mercedes Benz AMG GT and Mclaren GT. 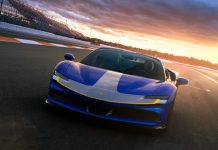