Middleweight bikes are powerful. But what works as a USP for them is that they are affordable too. Honda has finally launched the CB650R in India at Rs.8.67 Lakhs (ex-showroom, Gurugram). But accompanying the all-new Honda CB650R is the fully-faired CBR650R that is performance-oriented yet practical.

For your information, India is one of the biggest two-wheeler markets in the entire world. And therefore, almost every bike manufacturer is trying to expand their portfolio here. For now, both the new offerings from Honda will reach the Indian shores via the CKD route.

Honda is known for experimenting with almost each and every bike they introduce. Globally, this same bike is available with multiple engines on offer. To be precise, there is CB125R, CB300R and even a powerful CB1000R as well. Not to forget, Honda CB650R is already available since 2019. However, the Japanese bike manufacturer has launched the updated 2021 CB650R in India for the first time.

Design-wise, the all-new naked bike looks extremely rad with four colour schemes on offer. For your information, they are:

Based on the steel diamond frame, it comes with 41mm USD forks upfront sourced by Showa. Coming to the rear end, this bike sits on a single-tube monoshock unit. Braking duties on the Honda CB650R is handled by 310mm front discs. Meanwhile, at the rear, it gets a 20mm disc with dual-channel ABS.

Last but not least are the features. To name a few, there is an LED headlamp setup, USB Type-C socket as well as an LCD instrument cluster. Interestingly, the instrument cluster on the CB650R shows vital information such as gear position and peak hold indicator.

Honda CBR650R was already present in the Indian market. However, this time, the bike manufacturer has launched the updated version of the bike. It is available with the same 649cc liquid-cooled four-cylinder engine. Also, the power figures from this engine remain exactly the same.

Dig deep and one might be able to notice that it is almost similar to the CB650R, albeit in a fully-faired form. To begin with, even the CBR650R uses a 41mm Showa suspension unit at the front. Also, the rear end comes with a monoshock damper just like the naked 650cc motorcycle. Not to forget, the brake setup is exactly the same as well.

Now comes the difference. To begin with, when compared to the Honda CB650R, the CBR650R weighs around 5 kgs more. Further, there are two colour schemes available, including:

In India, Honda CB650R will go head-on against the likes of Kawasaki Z650 and Royal Enfield Interceptor 650. Also, Triumph has announced that the British bike manufacturer will launch the Trident 660 on 6th April. After which, even the Trident 660 will join this rivalry. For now, take a look at this quick comparison: 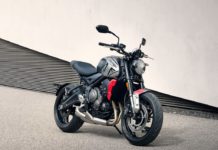 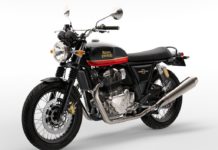