Coming to the looks of the SUV, it gets squared LED headlamps, squared wheel arches as well as a raised bonnet. However, at the rear, it gets a spare wheel mounted at the tailgate and the all-LED taillamps that looks purposeful for the rugged look.

Land Rover is also offering seven color options to choose from including:

The engine that powers the mighty Land Rover Defender 90, as well as 110, is a 2.0L Petrol unit. It produces 296BHP of power and 400Nm of torque while being coupled to an 8-speed automatic gearbox. However, both the SUVs come with a four-wheel drive system making them a truly capable offroader. Apart from this, both the SUVs also gets the Configurable Terrain Response, All-Terrain Progress Control, twin-speed transfer box, Hill Descent Control as well as an optional electronic active differential.

Inside the cabin, the all-new Defender comes with a 12.3-inch instrument cluster, 10-inch touchscreen Pivi Pro infotainment system, a head-up display, rectangular AC vents, surround sound system, etc. Meanwhile, as per the variant, it will also get a panoramic sunroof, folding fabric roof, driver assists and jump seats for the front row as well. 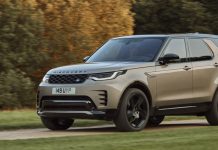 Land Rover Reveals 2021 Discovery; To Be Offered With Multiple Powertrains