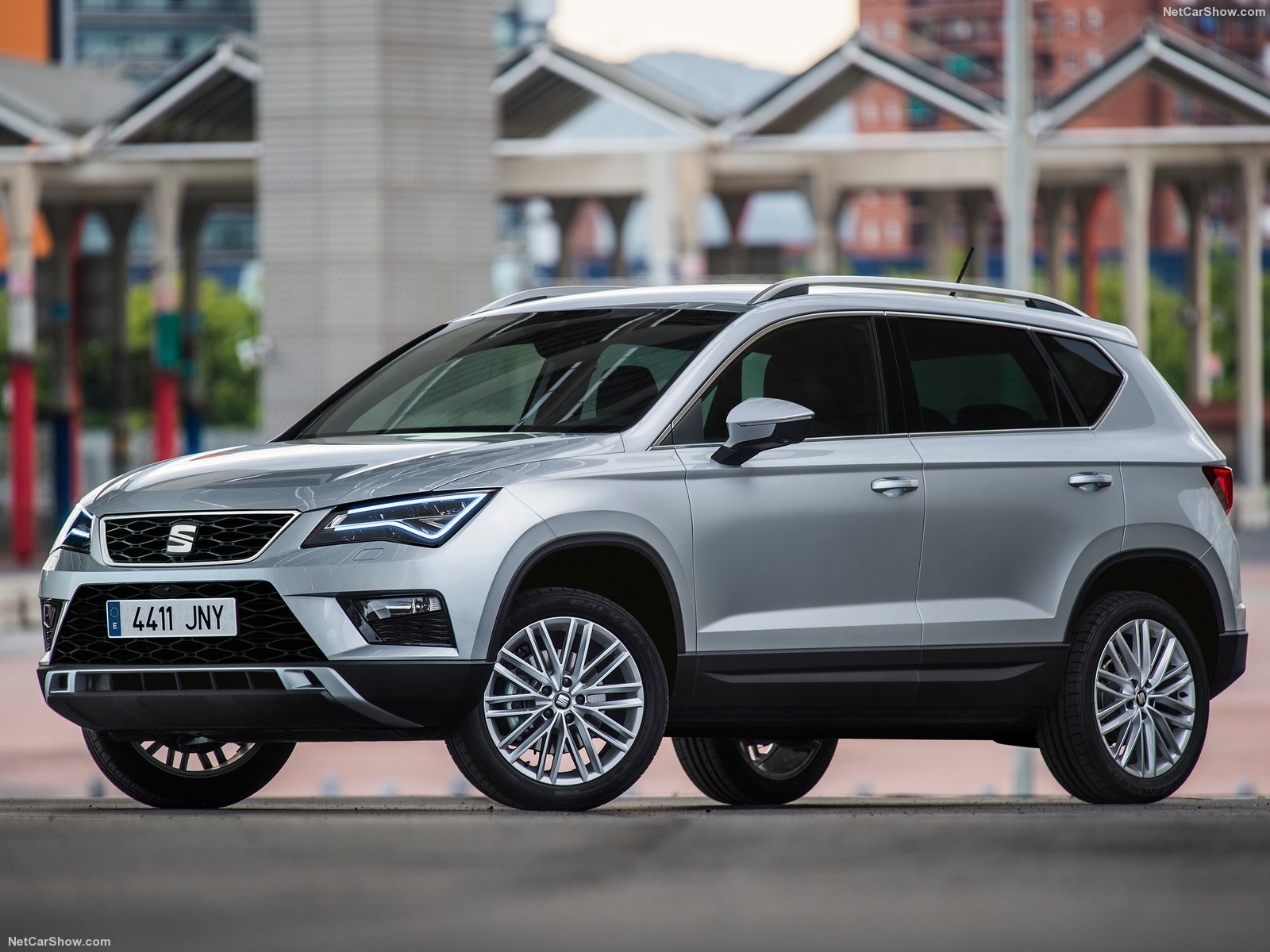 Seat has never built an SUV before, so the Ateca breaks new ground for the Spanish car company. But while I’ve never seen an off-roader Seat before, this isn’t an entirely new car beneath the skin.

The Ateca is based around the same platform as a host of other Volkswagen Group models. These include the fantastic Volkswagen Golf and Audi A3. That means Seat has had a tried-and-tested – and very well-regarded – foundation on which to build its new model.

Small SUVs like this are, of course, all the rage, so it’s no surprise that the Ateca will have a lot of very competent rivals to contend with. For starters, there’s the closely-related Volkswagen Tiguan and Skoda Kodiaq, while further afield, the Nissan Qashqai, BMW X1 and Mazda CX-5 will put up a strong fight.

But in its corner, the Ateca has eye-catching styling and an even more attention-grabbing starting price. Seat’s also claiming it to be the best-driving small SUV around – so there should be plenty here to like.

Space in the Seat Ateca

There’s plenty of room for four adults in the Ateca. Front seat occupants get no shortage of leg, head and elbow room, and while the rear quarters aren’t quite as spacious as those of the Honda CR-V, only the tallest adults will feel cramped back there.

In the boot, the good news continues, with plenty enough room for two large suitcases and, optionally, a flexible floor that offers you the choice between a flat load bay or a low floor for increased capacity.

That said, if you’re looking for ultimate carrying capacity, either a Honda CR-V or a petrol-powered VW Tiguan (not the diesel version) offer more space outright, and both feature clever rear seats that slide or fold up to increase space – something the Ateca can’t offer.

The only other downside with the Ateca’s interior is that there isn’t an awful lot of space to stash odds and ends. The glovebox is tiny, the door pockets are on the slim side, and the centre console’s bins and cubbies are rather stingy. You can get a slide-out storage box beneath the driver’s seat, but it’s only standard on SE models and above.

Comfort in the Seat Ateca

The cheaper an Ateca you choose, the more comfortable you’ll find it. Fascinating, ain’t it?

Higher specification models with their larger wheels aren’t completely uncomfortable, but they do jitter around on rough urban roads and crash through larger potholes and ruts, while diesel models suffer from a touch too much engine noise and vibration when pushed hard.

However, pick a smaller-wheeled model, and a petrol engine, and both problems dissipate considerably. The result is a car that’s quiet, comfortable, stable and well-behaved.

The Ateca’s seats, meanwhile, are really well judged. They offer plenty of support all over, yet they’re soft enough to feel welcoming when you climb aboard.

Dashboard Styling of the Seat Ateca

The Ateca’s dashboard will be familiar to anyone who’s ever driven a Seat Leon. It’s attractively designed and finished in soft-touch plastics, and while it doesn’t feel as classy as the dashboard you’ll find in the VW Tiguan or BMW X1, it’s nicer to the touch and easier to use than the Renault Kadjar and Honda CR-V.

Clear, no-nonsense dials sit in front of the driver, while the rotary controls for the heating and ventilation are about as straightforward as can be. Meanwhile Seat’s touchscreen system is pretty easy to understand, although some of its functions are buried deep within the menus when they could be easier to access.

Driving Ease of the Seat Ateca

No matter which version of the Ateca you choose, you won’t have too much trouble driving it.

Manual versions offer a light clutch with plenty of feel for the biting point and a slick, easy-going gearbox. Automatics, meanwhile, are a touch sluggish when pulling away, but slick and smooth on the move.

Visibility is pretty good in the Ateca, with no dramatic blind spots, and the front end is reasonably easy to judge thanks to the ridges on the bonnet. That’s fortunate, because front parking sensors are only available as an option, and only then on certain models, while rear sensors only come as standard from the SE version upwards.

You wouldn’t expect an SUV to be as fun as the Ateca is. Push hard on a twisty road and it responds happily, turning in sharply and without fuss and providing a reasonable amount of feedback through the steering and chassis.

There’s even a little adjustability there, which means you can trim your line using the throttle half-way around the bend – a nice surprise in a car as sensible and as high-riding as this one.

Both petrol engines are really responsive, and the smaller 1.0-litre even has a charming soundtrack as it revs eagerly round to the red line.

True, a Mazda CX-5 just has the edge over the Ateca for driver enjoyment, with its slightly sharper steering and an even more responsive chassis, but the Seat runs it a very close second.

Reliability of the Seat Ateca

In a market in which Kia will sell you a Sportage with a seven-year, 100,000-mile warranty, and Hyundai’s Tucson comes with a five-year, unlimited-mileage warranty, the Ateca’s warranty of three years and 60,000 miles is really the minimum Seat can get away with.

Every engine available in the Ateca range delivers impressive fuel economy. Petrol models offer some of the best fuel economy figures available on a car of this type, while even the diesels are beaten only by the super-frugal Nissan Qashqai and Renault Kadjar.

Interestingly, too, the Ateca is considerably more efficient than the similar Volkswagen Tiguan, which isn’t as efficient as you’d expect by dint of its extra weight. In other words, buy an Ateca and you should have one of the most efficient small SUVs around.

Safety in the Seat Ateca

Ateca model comes as standard with autonomous emergency braking, a system which detects an imminent head-on collision and applies the brakes, and has been proven to cut accidents by as much as 38 per cent.

Many rivals still don’t fit this important piece of safety equipment as standard, which puts the Ateca at the top of its class for safety.

Jaguar F-Type – Can it battle the Porsches?
Hyundai Santa Fe – One of the Better Hyundais
Comment