The Auto Expo 2018 was not short of stylish cars and mean machines, but two smaller, sportier cars from Tata also had their share of the limelight. The Tiago JTP and tigor JTP are upgraded from their top-selling older models in terms of design, sporty looks, performance, and interiors. Manufactured by Coimbatore based Jayem Automotives, both the cars have better styling, more power, and upgraded suspension. JTP stands for ‘Jayem Tata Performance’.

The biggest and best upgrade is the power output on the Tiago JTP and Tigor JTP. A 1.2-liter turbocharged three-cylinder petrol engine, same as the Tata Nexon, tunes for 109 bhp and 150 Nm of maximum torque. Paired to the motor is a 5-speed manual gearbox, which is said to get optimized gear ratios. Other upgrades include lower ground clearance and a revised suspension setup with lower springs. Disc brakes at the front and drum brakes at the rear comprises the braking system. Both the Tiago and Tigor had amassed tremendous public response in the past.

The Tiago JTP’s exterior has three-dimensional headlamps, LED headlights and taillights, and vibrant color options. The interior has a manual air conditioning and an infotainment system with smartphone connectivity along with four speakers and steering mounted audio. The safety features include front fog lamps, ABS with EBD, parking sensors and engine immobilizer.

The Tigor JTP, being the more powerful version of the Tigor sedan, rivals the Maruti Suzuki Dzire, Hyundai Xcent and Honda Amaze. Having mostly similar features with the Tiago JTP, it features stylish bumpers with accentuated fog light enclosures and larger airdams. Further highlighting its sporty intent are the vents on the bonnet, projector headlamps and OVRM finishes. Its motor is capable of producing 110 PS and 150 Nm of torque alongside a 5-speed manual with tweaked gear ratios to give better acceleration.

Targeted at young enthusiasts, the Tigor JTP and Tiago JTP are expected to hit the Indian automobile market later this year. 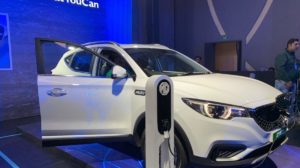