The Indian Wire » Automobiles » Why Do We Use Slip Rings In Motors? A motor in electrical engineering is a machine used for converting electrical energy to mechanical energy. An electric motor uses wire winding to combine its magnetic field and the electric current to generate force by rotating a shaft.

There are different classes of motors, depending on the power source, construction design, uses, and output motion type. The most common types are squirrel cage and slip ring motors.

Slip rings are electromechanical devices in the form of joints. It is used in the transmission of electrical signals, power or data in a fixed component and rotating one.

Why do we use slip rings in motors is to insert resistance into the rotor windings. The rings control the circuits in digital and analog systems.  Such as data transmission in radio telescopes, power shovels, aerodrome, beacons, or heliostats.

Slip ring design depends on its application. For data transmission, you need one that has higher rates in terms of bandwidth and EMI (electromagnetic interference) than the one transmitting. Basic designs of slip ring consist of a rotating ring and brushes.

The Physical Design of a Slip Ring Motor

Slip ring motors have a phase-wound rotor with a 3-phase, dual-layer of winding coils as those found in alternators. Each slip ring in the motor connects independently to one of the three phases of rotor windings.

The rotating core is made of steel laminations with slots to house the 3-phase windings. The setting of the winding is 120 degrees apart. The windings start internally, and on the outside, their ends connect to insulated slip rings mounted the rotor shaft. The terminal ends from the wounding touch the slip rings using carbon brushes held against the rings in a spring formation. A wound rotor motor has three slip rings made of copper or its alloy.

The slip rings mounts directly on the motor shaft but with insulation. The brushes used with slip rings are graphite and connects to a rheostat. Slip rings turn with the rotor while the brushes maintain contact with the rings to transfer resistance to the rotor windings.

The rotor poles wounding must be equivalent to the number of poles in the stator. Wounding is normally 3-phase, but a 2-phase winding is also possible.

The Working of A Slip Ring Motor

The carbon brushes connected to the rheostat start the 3-phase current, and the slip ring adds external resistance to the rotor circuit. The resistance is necessary, especially at the beginning to create a higher torque. 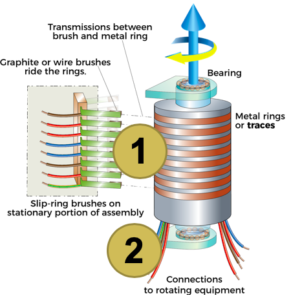 After starting, it runs and achieves the normal conditions, then the short-circuiting of the slip rings takes place.  A metal collar pushes along the shaft thus creating a contact on the brushes. The brushes lift from the slip rings and eliminate contact thus reducing loses, wear and tear due friction.

Why the Addition of External Resistance Importance

If the slip ring motor has extra external resistance, the rotor resistance will be high at the start, which reduces rotor current and increases the torque to the maximum.

The slip is necessary for the generation of maximum torque which is directly proportional to the rotor resistance. With increased slip and the external resistance, it’s possible to achieve pull-out torque at low speeds. That’s why slip ring motors work best where high inertia load requires a pull-out torque at almost zero speed.

If a slip ring motor is started either when the rotor terminals or the slip ring is shorted, it is bound to suffer a high locked rotor current with a very low rotor torque.

Pancake slip rings: It has conductors arranged on a flat disc centered on the rotating shaft. The design uses a shorter axial. The design has the following shortcomings.

Mercury-wetted slip rings: It replaces the brushes contact with liquid metal bonded to the contacts. The liquid metal (mercury) maintains the electrical contact during rotation between the stationary and rotating contacts.

The design has low resistance, and the connection is stable. The main drawback is that mercury is toxic. There is restriction of mercury-wetted slip rings motors application in industries dealing with food, health, or where contamination poses a serious threat.

Wireless slip rings: They transmit without actual contact or without using friction and contact brushes. Transfer of data and power is via a magnetic field created by coils placed in the rotating receiver and also in the stationary transmitter.

Wireless slip ring motors can operate in a harsh environment. They also require low maintenance and upkeep. The only limiting factor is power transmitted is low as compared to other contact type slip rings.

Why do we use slip rings in motors is to reduce the starting current and increase the torque. Slip ring motors have this capability. Slip ring in motors contributes to improvement in the functionality of many inventions.

Slip rings application in lifting and pumping has enabled man to apply electricity and use of motors in day to day activities. Examples include elevators, cranes, water pumps, among others.

Although there are other inventions, the slip ring motor still enjoys popularity in its use.  If you have a question about why do we use slip rings, leave a comment below and we’ll get back to you.