On Monday, the news of an agreement between the Adani group and the GVK group emerged over the stake sale of Mumbai International Airport Limited (MIAL). Adani Group acquired the controlling stake of the Mumbai Airport from the GVK group. They also acquired the GVK group’s part of the new upcoming Navi Mumbai Airport. They acquired the 50.5 percent GVK group share of MIAL along with a 10.5 percent stake of Airport Company of South Africa and 13.5 percent stake of South African company Bidvest, totaling to 74 percent, which now gives them the controlling share of the MIAL. The other 26 percent is under the Airport’s Authority of India (AAI). Talks of the deal were going on for quite some time.

Before, the Adani group found themselves to be the highest bidder of six airports which were passed on to them by the Union cabinet on a 50-year lease. The airports being Jaipur, Guwahati, Thiruvananthapuram, Ahmedabad, Lucknow, and Mangaluru. The bidding process under AAI ended in December 2019 and the group had offered the highest revenue per passenger which saw them winning the bidding war. Being the highest bidder, responsibilities like operational, development, and maintenance of the leased out airports were given to them by the AAI in a “public-private partnership” model.

The Adani Group website boasts “The Adani Group has forayed into the civil aviation sector by strategically acquiring Airport Development & Maintenance mandates throughout the country. This move is bolstered by the Group’s desire to upgrade the existing airport infrastructure in India to best-in-class standards, thus offering customers the most definitive airport experience. Having bid for various Airports Authority of India (AAI) airports, AEL has emerged as the highest bidder for all six of them that had been put up for privatization.” They are en route to become the top private airport operator of the company. Before this sector was held by the duopoly of two groups, namely GMR and GVK groups. Adani Group has already got several airports under their wing and aims to get more airports breaking the duopoly. They claim to develop world-class infrastructure at airports, both at airside and landside, enhance the passenger experience, create entertainment destinations (aerotropolis, airport village, hotels, and malls), increase domestic airline connectivity to new and under-served destinations, and also to increase flights to long-haul destinations in the West and also to South-East Asia.

This agreement, which was finalized on Monday will also see the Adani Group get the GVK’s par of Navi Mumbai Airport. According to reports, they will, “achieve financial closure of the Navi Mumbai International Airport project at the earliest to commence construction.”

On Monday, Adani Enterprise Limited said in a BSE filing, “Adani Airport Holdings Limited (AAHL), the flagship holding company of Adani Group for its airports business (and a subsidiary of Adani Enterprises Limited) has agreed to get the debt of GVK Airport Developers Limited (GVKADL). GVK ADL is the holding company through which GVK Group holds a 50.50% equity stake in MIAL, which in turn holds a 74% equity stake in Navi Mumbai International Airport Limited (NMIAL). According to the agreement, AAHL will acquire the debt of GVKADL from its airport lenders.”

“The GVK Group and AAHL have agreed that AAHL will offer a stand-still to GVK, in addition, to release of the guarantee given by GVK Power and Infrastructure Limited with respect to the debt acquired by it. The Adani Group will also take steps to complete the acquisition of a 23.5% equity stake from ACSA and Bidvest in MIAL for which it has obtained CCI approval. Upon the acquisition of the debt of GVK ADL, Adani Group will take steps to obtain necessary customary and regulatory approvals, as may be required, to acquire a controlling interest in MIAL. AAHL intends to infuse funds into MIAL to ensure that MIAL receives much-needed liquidity and also achieves financial closure of Navi Mumbai International Airport to be able to commence construction,” the regulatory report added.

GVK Group’s statement about the Adani-GVK agreement over the Airport read, “Acquisition of debt by Adani from various GVK lenders including a Goldman Sachs led consortium and HDFC; release GVK of various obligations, securities and corporate guarantees given in respect of debt to be acquired by Adani and ability for Adani to convert the acquired debt to equity of GVK Airport Developers Ltd (GVKADL) on mutually agreed terms, subject to obtaining necessary regulatory approvals.”

In October 2019, the GVK group acquired fundings of a total amount of ₹ 7,614 crores from the Abu Dhabi Investment Authority (ADIA), Public Sector Pension Investment Board (PSP Investments), and NIIF. They stated that the funding was to “retire debt obligations” of the holding companies and aimed to buy the shares of their South African partners, Bidvest and ACSA by the right of the first offer already exercised by GVKAHL. But, the funding did not materialize.

The GVK group in a statement also informed that the company had separately informed Abu Dhabi Investment Authority (ADIA), National Investment and Infrastructure Fund (NIIF), and PSP that their transaction documents were terminated because now it was neither effective nor implementable. They also stated the reasons for their decision. They were:

B) the alternative proposals discussed would not provide a resolution to the lenders by the end of August, which was a requirement of our lenders” 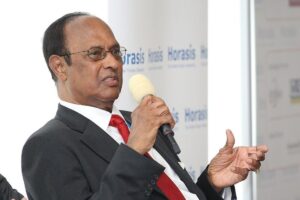 GVK Group chairman G.V.K. Reddy quoted, “The aviation industry has been severely impacted by COVID-19, setting it back by many years and has impacted the financials of Mumbai International Airport Limited. It was therefore important, that we bring in a financially strong investor in the shortest possible time to improve the financial position of MIAL, as well as to help achieve Financial Closure of the Navi Mumbai International Airport project, which is a project of national importance. It is under these circumstances that we agreed to cooperate with Adani so as to achieve these twin objectives. Further, when the transaction is consummated, which is subject to customary approvals, we would be reducing a significant portion of liabilities to our lenders, which is of utmost importance to the group.”

The complete and transparent figure of the debt being acquired was not put out by either company’s spokesperson. Veratech, a business intelligence company, estimates that the GVK Airports Developer had an outstanding debt of ₹ 3,739 crores at the end of FY19 while the outstanding debt of MIAL was ₹ 8,109 crores. On May 7th, ET reported that the total debt of Adani Group was ₹ 1.3 lakh crores.