Bank of Baroda share price slumped more than 3% on August 11, a day after the lender reported its June quarter numbers.

The bank reported a net loss of ₹864 crore during the quarter ended June. The bank’s profit was at Rs 709.6 crore in the corresponding period last fiscal. 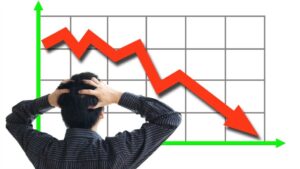 Nearly 20% of the bank’s portfolio is under moratorium and the loss was led by higher provision and contingencies.

The bank posted a net loss of Rs 864.3 crore for the June quarter 2020 due to provisioning on standard accounts. The bank’s profit was at Rs 709.6 crore in the corresponding period last fiscal.

“On account of provisioning on standard accounts of Rs 1,811 crore, the bank reported a net loss of Rs 864 crore in Q1 FY21 and consolidated net loss stood at Rs 679 crore

The bank’s loss came as a surprise to the market as a Bloomberg poll of 12 analysts had predicted a profit of ₹514 crore. The bank had posted a net profit of ₹710 crore in the same period last year.

BoB’s provisions rose 71% on a year-on-year (y-o-y) basis to ₹5,628 crore. Of this, the bank said ₹1,811 crore was towards standard accounts, including ₹996 crore for loans under moratorium where the asset classification benefit was granted.

What should investors do after Q1

“Of the ₹1,811 crore, half is accounted for by the provisioning that has been done as per the RBI dispensation for assets that have not slipped on account of the moratorium. The other half of nearly ₹900 crore is on account of a government-guaranteed loan the bank has.”

The total amount due for this loan is ₹7,600 crore, of that about ₹5,600 crore is guaranteed by the government.

Its net interest income, or the difference between the interest earned on loans and paid on deposits, increased 5% y-o-y to ₹6,816 crore in Q1 FY21. The bank’s net interest margin (NIM), a measure of profitability, stood at 2.55%, down 8 bps from the sequential quarter.

The bank’s gross bad-loan ratio or total bad loans as a percentage of total advances, fell 89 basis points (bps) y-o-y to 9.39%. Its asset quality improved in the June quarter as the net NPA ratio also declined 112 bps from the same period last year.

Considering the above parameters and how undervalued currently the stock is with a P/B ratio being 0.27, the investors should go for this stock for the long term. The stock will surge for sure once the COVID situation improves.