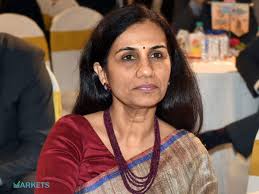 Look-out notice is a circular issued by the investigative agencies to restrict the movement of people, specially to abroad.

Last month, CBI registered an FIR against Chanda Kochhar along with two other accused, in a controversial case of nepotism and favoritism by former CEO of ICICI, regarding the disbursal of ₹3,250 Crore loan. The loan was given to Nupower company in which her husband owned stake.

Earlier in 2016, a whistle-blower of ICICI bank wrote a letter to Prime Minister and Finance Minister alleging that Mrs. Kochhar violated the banking norms while lending loan to Nupower. Later in 2018, the letter surfaced on social media, prompting ICICI bank to start an internal inquiry against Chanda Kochhar.

Chanda Kochhar has worked with countries third largest lender for more then 30 years and became its CEO and MD in 2011. After these allegation, in October 2018, she quit ICICI bank as CEO and MD. Sandeep Bakshi who was then the COO of Bank, became the new CEO for next five years.