The Indian Wire » Business » COVID-19 Lockdown: Merchandise Imports and Exports goes down by 60% in April On Friday, data released by the Indian Ministry of Commerce show that merchandise exports fell sharply down to 60.3% while imports shrunk by 58.7%. This fall has led to a trade deficit of ₹51,000 Crore. But, this decline in April was not surprising at all as a 34.6% drop in Indian merchandise exports, was recorded, while imports saw a 28.7% decline in the month of March.

With the COVID-19 pandemic sweeping the world over, several countries have effectively sealed up their border to help curb the spread of this virus. Furthermore, Indian economy has been reeling under a 2-month long nationwide lockdown that resulted in a complete halt of all “non-essential” economic activities. Consequentially, India happens to be one of the countries, confronted with massive shrinkage in international imports and exports.

So, the Central Government will be trying to reopen the economy, in a phased manner, post the lockdown which ends tomorrow. Some experts are saying that this staggered reopening of the economy doesn’t necessarily mean that imports and exports are about to open up this month as well. “However, a pause in remittances may prevent a current account surplus in Q1 FY2021,” others say.

The aforementioned goes into further details about the trends in imports and exports. Its data shows that only iron ore (17.5%) and pharmaceuticals (0.25%) showed any sign of positive growth in imports, in April.

Other non-oil imports, which usually amount up to the majority, saw nothing but a decline.So, while this contraction in imports was broad-based, 66% of it was concentrated in items such as gold and precious stones, electronics, machinery and coal. But, on the other hand, engineering machinery, gems and jewellery, and textiles took up a better part of the 59.3% decline in non-oil exports, past month.

The World Trade Organization (WTO) has estimated global merchandise trade to drop between 13% and 32% in 2020 due to the Coronavirus pandemic.

“The wide range of possibilities for the predicted decline is explained by the unprecedented nature of this health crisis and the uncertainty around its precise economic impact. But World Trade Organization economists believe that the decline will likely exceed the trade slump brought on by the global financial crisis of 2008‑09,” it stated, in a report which released in April. 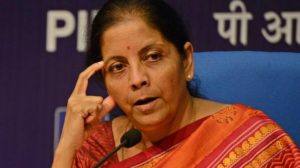