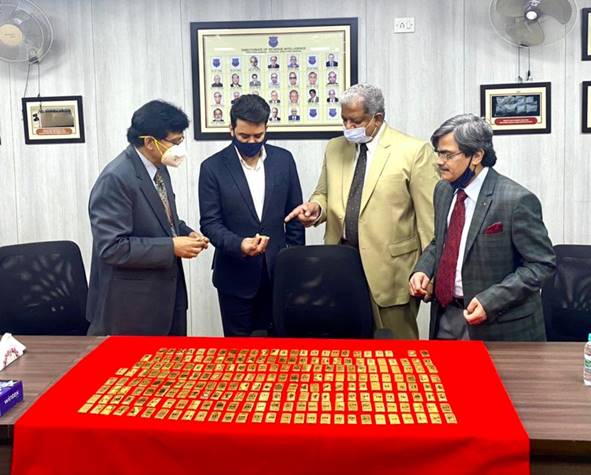 New Delhi: The Delhi Zonal Unit of the Directorate of Revenue Intelligence (DRI) seized 55.61 kg of foreign-origin gold valued at Rs. 28 crores from eight persons at Delhi and Lucknow on Thursday.

As per the official release, specific information was developed by DRI regarding the smuggling of a huge quantity of foreign origin gold from Myanmar into India through the Indo-Myanmar border and sending it to different parts of India. The spurt of economic activity seen after the lifting of COVID-related lockdowns throughout the country, combined with the pent-up demand for gold, coincided with a surge in such smuggling activities. The blocking of air routes through the lockdown period also saw a significant shift in the modus operandi of smugglers from the air routes to the land route through the Indo-Myanmar border.

Due to the intensive counter-smuggling efforts by DRI, the smugglers have been seen to shift their preferred modus from vehicle concealment to in-person concealment. However, in the latest operation, codenamed “Golden Triangle”, which was a coordinated effort by the officers of Delhi Zonal Unit and Lucknow Zonal Unit of DRI, the modus of human concealment has also been busted where the carriers were found to have been concealing the gold bars in belts worn around their waists. Five such passengers were intercepted by officers of DRI, Delhi Zonal Unit near Delhi, and three passengers were intercepted by the officers of DRI, Lucknow Zonal Unit at Lucknow. A search of the persons resulted in the recovery and seizure of 335 gold bars, weighing 55.61 kg. The said 8 persons have been apprehended and further investigations are underway.

The Ministry of Finance informed that the Minister of State for Finance and Corporate Affairs Anurag Singh Thakur visited the office of DRI, Delhi Zonal Unit to congratulate the officers of DRI for the successful seizure. Chairman CBIC and Pr. DG, DRI was also present.