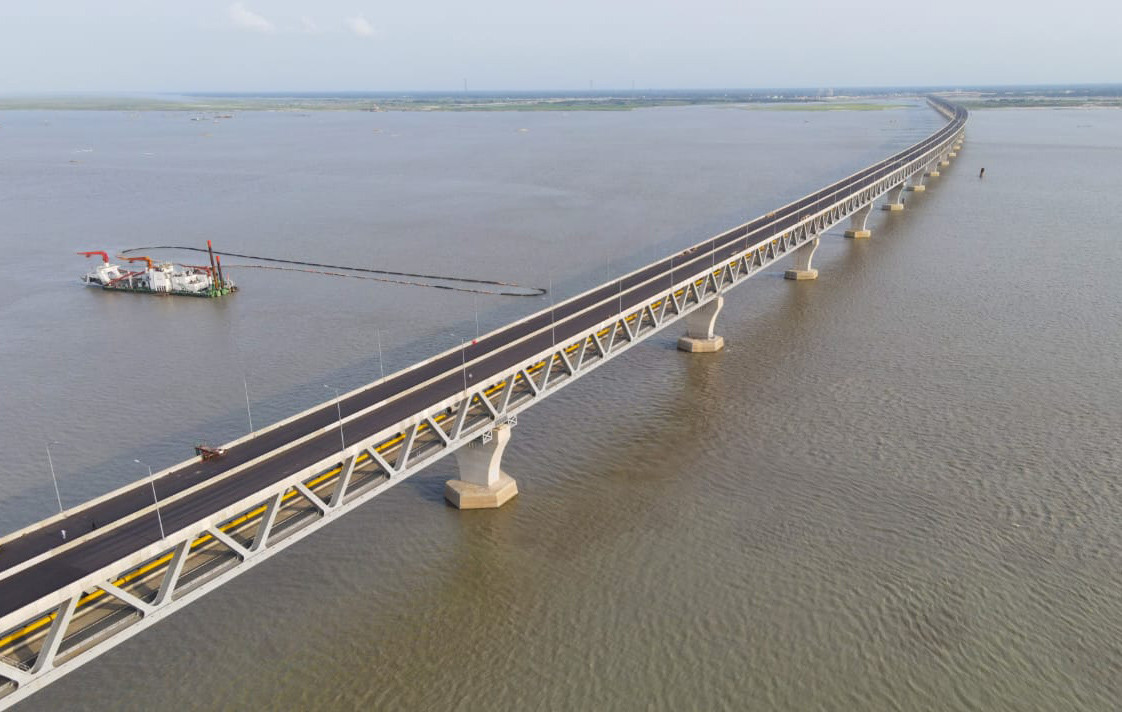 Before the inauguration date of the Padma Multipurpose Bridge hits, Prime Minister of Bangladesh Sheikh Hasina has cleared the air that the landmark infrastructure project has no connection with China’s Belt and Road Initiative (BRI).

Prime Minister Sheikh Hasina will inaugurate this project on June 25.

The 6.15-kilometer-long bridge’s construction began in 2014, and Dhaka stated the government of Bangladesh funded the entire project, with construction firms from Bangladesh and overseas hired to finish it.

“The completion of this bridge will fulfill the long-cherished dream of the nation for connecting the 19 south-western districts with the rest of the country resulting in collective prosperity, socioeconomic development of Bangladesh as well as enhanced regional connectivity,” the Ministry of Foreign Affairs of Bangladesh said in a statement.

As per the website of the Padma Multipurpose Bridge, the project funding was supposed to be sourced from World Bank, the Asian Development Bank, the Japan International Cooperation Agency (JICA), and the Islamic Development Bank, but on July 9, 2012, the Sheikh Hasina government scrapped to go ahead with the plan and decided to finance the project all by themselves.

The newly constructed bridge will have a railway track operating at the lower tier while the upper tier has a four-lane highway vehicular traffic. The bridge connects the Mawa and Janjira sides of the Padma River, which is notable for carrying a large volume of water for most of the year.

This 6.15-kilometer bridge joins southwestern Bangladesh’s 21 districts with the country’s capital Dhaka. It acts as a vital link between southwest Bangladesh and the northeast of the country.

With the construction of this road-rail bridge, goods can be easily transported between southern and northern Bangladesh, which earlier was done via shipping.

Operationalization of the bridge will save time covering two sides drastically which will help in connectivity in Bangladesh as well as in the movement of goods and people with India.

For this, a pre-feasibility study was conducted in 1998-99, at the time of the first tenure of the present PM Ms. Hasina.

The project was put on hold after the Sheikh Hasina’s government lost power but later was restarted with the come back of Ms. Hasina as Prime Minister in January 2009. In 2014-15, the initiative got a sketch. Foreign funding agencies such as JICA were involved at the assessment and evaluation level, but the Bangladesh government opted to bear the cost of approximately $3.9 billion for this project.

How China Came Into The Picture ?

China Railway Major Bridge Engineering Group, a Wuhan-based entity, was awarded the project for construction. The Information Minister of Bangladesh, Hasan Mahmud, has said that the Chinese company was given a contract to build the project. The govt. had put out a global tender for this.

The funds were from the Bangladesh government, while construction work was given to a Chinese company.

A group called ‘Bangladesh-China Silk Road Forum’ last week announced that it would hold a panel discussion on ‘The Padma Bridge: An Example of Bangladesh-China Cooperation under Belt and Road Initiative’ on June 22.

This group claims this 6.15 rail-road link bridge to be a bilateral cooperation deal between China and Bangladesh, placing it under BRI plans, while completely ignoring the fact that the foundation of this project was laid by Prime Minister Hasina long before BRI’s formation.

The Belt and Road Initiative (BRI), a multi-billion-dollar project, launched by Chinese President Xi Jinping, came into existence in 2013. The objective of this project is to connect Southeast Asia, Central Asia, the Gulf region, Africa, and Europe with a network of land and sea routes.

The group said leaders from Bangladeshi political parties, including the ruling Awami League, and China’s envoy in Dhaka will participate in the event.

Reacting to this, the foreign office has passed a statement, reading: “It has come to the attention of the Ministry of Foreign Affairs that some quarters are trying to portray that the Padma Multipurpose Bridge has been constructed with the assistance of foreign funds and is a part of the Belt and Road Initiative.”

A Chinese embassy spokesman, meanwhile, has told a group of journalists that the bridge was built entirely with Bangladeshi funds, but “We are proud that a Chinese construction company was involved in building the Padma Bridge”.

“The (China Railway Major Bridge Engineering Corporation) company which had built a bridge on our mother river (Yellow River) decades ago has built the first longest such bridge (over the Padma) outside China,” he said.