RBI places Lakshmi Vilas Bank under moratorium for a period of one month; Restricted withdrawals at ₹ 25,000 for depositors

The Reserve Bank of India (RBI) on Tuesday has placed Lakshmi Vilas Bank (LVB) under the moratorium. Due to serious deterioration in the lender’s financial position, the bank has been placed under a moratorium for a period of one month and restricted withdrawals at ₹ 25,000 for depositors.

The Reserve Bank of India in its official statement has said, “In the absence of a credible revival plan, with a view to protecting depositors’ interest and in the interest of financial and banking stability, there is no alternative but to apply to the Central Government for imposing a moratorium under section 45 of the Banking Regulation Act, 1949. Accordingly, after considering the Reserve Bank’s request, the central government has imposed moratorium for thirty days effective from today.”

The banking regulators took matters in their hand since Lakshmi Vilas Bank back in September expelled an RBI-approved CEO and director. To manage the day-to-day affairs of the bank they had approved a committee constituting three independent directors who are, Meeta Makhan, Shakti Sinha, and Satish Kumar.

RBI said, “The financial position of Lakshmi Vilas Bank Ltd has undergone a steady decline with the bank incurring continuous losses over the last three years, eroding its net-worth. In absence of any viable strategic plan, declining advances, and mounting non-performing assets (NPAs), the losses are expected to continue.”

The Reserve Bank has also drafted a scheme of amalgamation for the bank with the DBS Bank of India. They aim to complete the merger of the banks before the end of the moratorium period.

DBIL, which is a wholly-owned subsidiary of DBS Bank of India, according to information by the RBI, will bring in additional capital of ₹2,500 crore upfront, to support credit growth of the merged entity.

RBI said, “Owing to a comfortable level of capital, the combined balance sheet of DBIL would remain healthy after the proposed amalgamation, with CRAR at 12.51% and CET-1 capital at 9.61%, without taking into account the infusion of additional capital.”

According to the moratorium order, the public bank would not “make, in the aggregate, payment to a depositor of a sum exceeding Rs 25,000 lying to his credit, in any savings, current or any other deposit account, by whatever name called” without RBI’s permission.

The Reserve Bank of India has also informed the depositors of Lakshmi Vilas Bank that their interest will be fully protected and there is no need to panic.

As for the position of administrator of the bank, T N Manoharan, former non-executive chairman of Canara Bank has been appointed.

Earlier, the Reserve Bank of India disapproved of the proposal of LVB with Indiabulls Housing Finance after which the bank initiated merger talks with Clix. The bank urgently needed an investor as it was facing lending restrictions for over a year from RBI under its prompt corrective action after executives came under probe for fraud in respect of fixed deposits of Religare Finvest.

The central bank also added, “The financial position of Lakshmi Vilas Bank Ltd. (the bank) has undergone a steady decline with the bank incurring continuous losses over the last three years, eroding its net-worth. In absence of any viable strategic plan, declining advances, and mounting non-performing assets (NPAs), the losses are expected to continue.” 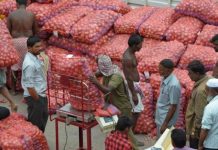 Whole Price Inflates To 1.48% During October, Higest Since February