The Maharashtra government announced to waive farmers loan of up to  ₹2 lakh, with a cut-off date of September 30, 2019.

The announcement came on the last day of the winter session at the Nagpur Legislative Assembly. Chief Minister Uddhav Thackeray said that my government will waive crop loans outstanding till September 30, 2019.”

In addition, the farmers who repay their loans on time would be given a special scheme, he said.

Promising that the loan waiver would not be conditional, Finance Minister Jayant patil said that the information regarding the same would be provided in due course.

However, opposition leader Devendra Fadnavis, who had earlier served as then Chief Minister of Maharashtra from 31 October 2014 to 12 November 2019,  said that the newly formed coalition government had failed to fulfill its original promise of full waiver of loans.

He also said that the Sena-led government failed to provide aid of ₹25,000 per hectare to farmers who suffered heavy losses owing to unseasonal rainfall, a demand that Mr. Thackeray had made before he became CM.

After this, Mr. Fadnavis, the leader of the Bharatiya Janata Party with rest of its MLAs of staged a walk out in protest. 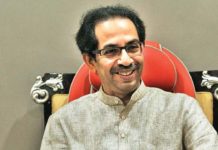