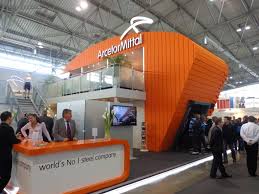 The National company law Appellate Tribunal (NCLAT) has finally given approval nod to long pending Insolvency case pertaining to Essar steel, The approval comes a week after the order by NCLT Ahmedabad bench. Although, the official confirmation of news is yet to be made.

The apex tribunal has accepted the ₹42,000 crore debt resolution plan proposed by Laxmi Mittal led ArcelorMittal and has asked it to deposit the amount to the Committee of Creditors (CoC) so that the resolution plan can go forward.

Earlier, on Friday the apex tribunal refused to put stay a bankruptcy court order approving steel giant ArcelorMittal’s bid for Essar Steel. It (NCLT) had sought for a new plan for the distribution of bid amount between financial and operational creditors of the debt-laden firm and increased the share of operational creditors. The following judgement by the NCLT’s Ahmedabad bench came a week after NCLAT directed the NCLT (Ahmedabad bench) to take decision pertaining the resolution plan.

The next hearing as per reports is scheduled on 27 March.

Now with the final approval of apex tribunal the famous and long time pending case of IBC seems to come to an end.