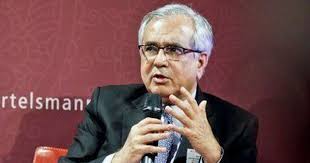 “…It is important for this particular office be separate, because then you can pay much more attention on public debt management. That will help the government in bring down cost of its debt,” Kumar said at an event organised by Niti Aayog here.

The demand for an independent debt management office has been gaining  sentiment since 2015. In budget speech of 2015, finance Minister Arun Jaitley announced for setting up an Independent Public Debt management Agency (PDMA) but no work has been done since then.

The motive behind setting up of PDMA was to resolve issues relating to conflict of interest as the RBI decides on the key interest rates as well as undertakes buying and selling of government bonds.

During the event organised by Niti Aayog, Kumar also talked about whether RBI should be just an body for monetary policy making and supervising bank or it should also work as the debt management office for incumbent government.

Talking about the synergy between RBI and Finance ministry he said in present time both are working together in tough times without any single causality. On banking system of India, he said that India needs global size banks so that the banking system could benefit from economies of scale.

“India’s largest bank is still the 60th largest bank in the world and that does not give you clout in the global financial markets… and the advantage of scale is just not there,” he said during the event.