Petrol and diesel will not come under GST in the near future as neither the Central nor the State governments spoke in favor of it. ‘All states were opposed to the idea’, PTI cited a source stating this.

How it affects the government

If petrol and diesel come under GST then the highest tax bracket that can be allotted will be 28%. This will result in losses up to ₹20,000 cr for the Center and revenue shortfall for the States.

In June this year, Rajiv Kumar Vice Chairman NITI Aayog said in an interview with IANS, ‘It (oil) can’t be brought under GST. That’s because the total state and central taxes on petrol put together are around 90 per cent right now. I can’t see how any state will take a cut so huge as the highest rate under the GST is 28 per cent. A new GST band will have to be opened up, and that will be an enormous exercise.’

When GST was rolled out in July last year, 5 petro products were kept in purview. These included petrol, diesel, natural gas, jet fuel and crude oil. As of now, only petrol and diesel will not be included under GST brackets for some time. 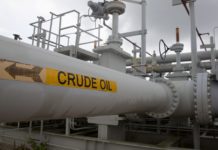