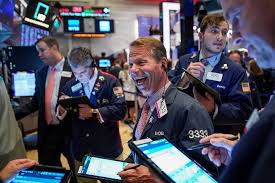 The market is sometimes incredibly difficult to understand. Often it will make turns which are not expected, currently the market is supposed to be bearish given the economic situation of the nation. But how is it bullish? Not only Dalal street has been spewing some incredibly astounding results when it comes to winners, but markets from around the world.

The starting point could be attributed to Federal reserve signalling no interest rate hikes until 2023. Following the news, stocks like Advanced Micro Device (AMD), Alibaba (BABA), and Tesla (TSLA) to name a few hit record high till at least last Thursday.

With the looming threat of a second wave, it was no wonder that the major league winners were the ones which were already relevant in the current market scenario, such as Zoom Video Comm. (ZM), Chegg (CHGG) and other large caps such as Microsoft (MSFT) and Apple (AAPL).

As of the time of writing this article, Dow Jones futures are down by another 3% with respect to fair value and on a similar note, S&P 500 futures were down by 2.45% all the while Nasdaq 100 futures retreated a 1.6%. Huge movements are expected overnight due to pending declarations and announcements from the Labour Department which is set to release jobless claims data as economists predict record high unemployment benefit filings. All of which will affect the market significantly.

The market however was not all rainbows and sunshine, significant losers in the Dow Jones market Boeing (BA) and Delta Airlines (DAL) both of whom have reported heavy loses in this financial quarter and is expected to further fall as Delta Airlines reported a 90% drop in Q2 revenue compared to last year.

The domestic market tells a similar tale with at least twenty BSE 500 stocks delivering an astounding average of 150% since the tanking of March 24th. Notable winners are Vodafone-Idea which jumped 200% since it’s late March low, Reliance Power which saw a hie of 145% closely tailed by Suzlon Energy at 140% to name a few. Interestingly these companies are in some stages of debt resolution thus could be the result of value buying but it can also be speculation, we can’t determine at this juncture for sure.

To address the elephant in the room, we have to talk about the pharma market both internationally and in India. The rally in pharma space is mainly because of the severe decrease in the investor’s risk appetite. There simply is no other industry which can promise or is expected to grow in the near future let alone right now.

In the domestic market, Panacea Biotec (NSE: PANACEABIO) is currently enjoying a surge shy of 20% since it announced its late but hopeful association with US based Refana for Covid-19 vaccine development, manufacturing, and distribution. On a similar note, Dishman Carbogen Amcis Ltd. (NSE: DCAL) which saw it’s early June prices of 74 INR soar to 133 INR on 10th June following good financial records for end quarter of March 2020. The company’s EBIDTA showed promising future and had a better projection for upcoming quarters.

Rakesh Jhunjhunwala also expressed his confidence in pharma sector’s growth. Following those trains of logic, these are the top three stocks to keep an eye out for.

With all that being said, the market is currently bullish but there appears to be no solid evidence or foundation to base this current rally on. It is true that pharma will continue to increase in the long term as non-covid industries reel back on their expenses. What happens remains to be seen.