August 5 marks a historic day in the Hindu culture. For the second year in a row, this date has provided Indians something to celebrate. In 2019 the BJP led government went on to revoke article 370 and transformed Jammu and Kashmir into two Union Territories, abolishing its special status. This year the prime minister attended the Bhoomi Pujan of the famous Ram Mandir of Ayodhya.

This the site where once stood the famous Babri Masjid built by Mir Baqi, on orders of Mughal emperor Babur in 1528-29. However, according to Hindu scripts, this place marks as the birthplace of Lord Ram. The root of the problems begins as it is believed that there was a temple that was demolished for building the Mosque.

Since the British era, the place has started several controversies, and the British divided the mosque area into two parts so that the two religious groups could share the area. In 1949, the idols of Lord Ram were found inside the mosque which led to several problems and the government of India locked the place and labeled it disputed property.

Taking a look into the matter:

The Prime Minister congratulated the citizens of the country that achieved this historic feat for every Hindu in every nook and corner of the world as he laid down the silver brick of the Ram Mandir.

Most of the citizens are awed to see the recent development of the place which had been a disputed land for decades with multiple cases from supporters of both religions. This is not only exciting but also emotional for every Ram-devotee.

Not only for the Hindus but also for this historic monumental creation of the Mandir is bound to change the lives of Ayodhya citizens for good. The economic development of the land will see is exponential.

Being one of the seven pilgrimage sites of the Hindu culture, devotees will flock to the town from every part of the country. This is also the birthplace of Lord Ram. If among the estimated 1 billion Hindus across the globe, only 10% are Ram Bhakts, there will be no holier place in the world for those 100 million people. For them it would be like Mecca is for Muslims, Jerusalem is for Jews and the Vatican for the Catholics.

The Supreme Court in its judgment after hearing several cases cleared the place for the creation of the Ram Mandir. This creation will now give way to a profitable lifestyle to a large group of people in Ayodha. It will also add significant economic value to the place.

The industry that is foreseen to boom, is the Tourism Industry. It will create thousands of jobs across the city. It will also provide fresh opportunities for many. Though currently, due to the ongoing pandemic, the place will not see much in terms of tourists as there are several travel restrictions. As soon as the situation takes a good turn the place will get flooded with visitors not only of Hindu culture but also it can be foreseen to be a major international tourist attraction. With hopes of a new vaccine to be out soon and places of worship allowed to function with strict rules, the wait won’t be long.

The government also gave an approximate estimation of the time it will take to construct the temple. It has been said that within 3.5 years the temple will fully be constructed and ready to function. The cost of building the magnificent temple is estimated at around Rs. 3000 crores.

India already has a huge religious tourism industry. As this industry comes across different people of different cultures, it will always need to be developed and overseen by men and women. Automation in the industry is not feasible. Also, the number of tourists will be unprecedented. If we take an example of the holiest place of Sikh religion, Harmandir Sahib in Amritsar approximates a daily footfall of 100000 people. There are almost three times more followers of Hinduism than that of the Sikhs.

The state government of Uttar Pradesh has estimated Rs. 85 crore for the betterment of tourism around the temple. This will create more infrastructure and in turn, will open up vacancies for new jobs.

The government has also allocated Rs. 500 crore for building an airport in Ayodha so that it would be easier for the people to come and go. The land around the temple will also increase in worth. If sold or rented at the right time, the owners stand a chance to bag big profits. Real estate is another industry that has a chance to fly high in the following years around the temple.

These are only some examples of how things can change for the people of Ayodha. A lot of other possibilities will emerge as time passes.

Indian Express, in a report, said that a Vishwa Hindu Parishad official has stated that Larsen and Turbo are ready to construct the temple in Ayodha for free. They also reported that L&T has shown interest in the construction and technical projects of the Ram Mandir without charging a penny. 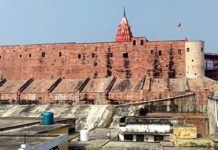