Gold and silver prices in India have hit the highest hysteria after posting strong gains in the previous session. On MCX, August gold futures rose 0.6% to a new high of ₹52,410 per 10 grams. Silver futures on MCX advanced 2% to ₹67,000 per kg. In the previous session, gold had surged 2.2%, crossing the ₹52,000 level for the first time. On the other hand, silver had jumped 7.5%. In global markets, Gold continued its record-breaking upturn as investors were confident that the US Federal Reserve will continue with its accommodative monetary policy wherein the economy will be stimulated by lowering interest rates. Fed policymakers- the nations monetary policy authority- on July 17 2020 held a meeting to discuss major policy changes. Spot Gold surged to $1,975 an ounce, rising $160 in just six sessions. Gold futures rose 2.3% to $2,000 an ounce. Silver rates surged 5% to reach $25.81, up almost 33% in seven these sessions.

Why did the gold prices go up and up?

Over the past several decades, the price of gold has been influenced by many different factors. Gold’s price history has seen some significant ups and downs, and dramatic changes in price may be fuelled by such issues as central bank buying, inflation, geopolitics, monetary policy equity markets and more.

One of the biggest drivers of gold is currency values. Because gold is denominated in dollars, the greenback can have a significant impact on the price of gold. A weaker dollar makes gold relatively less expensive for foreign buyers, and thus may lift prices. On the other hand, a stronger dollar makes gold relatively more expensive for foreign buyers, thus possibly depressing prices. Fiat, or paper currencies, have a tendency to lose value over time. If this continues to be the case, gold could potentially continue in an uptrend as investors look to it for its perceived safety and its potential as a hedge against declining currency values. Gold has long been considered a reliable store of wealth and value, and that reputation is not likely to change any time soon.

Although past performance is not necessarily indicative of future results, gold’s price history can potentially provide clues as to where it could be headed. Looking at past price data, for example, may help with spotting uptrends or downtrends. Investors may also potentially spot tradable patterns within the price data that can potentially lead to solid buying or selling opportunities.

Gold had a remarkable performance in the first half of 2020, increasing by around 25 per cent from its low in March and significantly outperforming all other major asset classes. Gold futures prices soared to a nine-year high of $ 1,856.60 per troy ounce in London on Wednesday, inching closer to their record high of $1,920 an ounce hit in September of 2011. One troy ounce is equivalent to 31.1034768 grams.

“International gold prices have been on the rise in the last a few months and picked up pace amid sharp losses in the dollar, additional stimulus measures and robust investor inflows. Rising virus cases and US-China tensions have also underpinned the gold price,” said Ravindra Rao, Head of Commodity Research, Kotak Securities.

What was the price of gold then?

If you are considering an investment in gold, you may want to take a look at the metal’s price history. Depending on the currencies being used, you may find a better long term value. For example, because gold is typically denominated in U.S. Dollars, if the dollar is weaker then someone buying gold in yen or euros may find gold to be relatively less expensive. On the other hand, a stronger dollar may make gold relatively more expensive in other currencies due to exchange rates.

You can also easily examine historical gold prices on a much smaller time horizon from 10 minutes to three days to 30 days to 60 days and up. The time-frame you decide to look at may depend on your investment objectives. If you are simply looking to buy and sell gold as a swing trader, you may focus on the hourly or six hour charts. If you are looking to invest in gold for the long-term, you may be better off using longer timeframes such as weekly, monthly or yearly.

Why Look at the History of Gold Prices? Looking at historical gold prices may potentially provide information that may assist in buying or selling decisions. Looking at the big picture, gold trended higher for many years before making all-time highs in 2011 of nearly $2000 per ounce. Gold has since been moving lower, but could have possibly found a bottom in 2016. Although it remains to be seen, gold’s declines from the 2011 highs could simply prove to be a pullback within an even longer-term uptrend.

Examining historical gold prices can potentially be useful in trying to identify potential areas of price support to buy at. For example, if gold has pulled back to $1200 per ounce on numerous occasions but is met with heavy buying interest each time, then the $1200 area could be considered a level of support and could potentially be a good area to try to buy at.

Why did the Silver Price Rise? 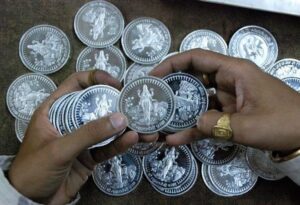 The “shiny grey metal”, as we would say, is far more hazardous as an investment or a trade even than its more glamorous big sister, Gold, and gold has been known to take down many a trader or investor who bought at the wrong time and ended up stuck on the bad end of a two-decade price slide, as between 1980 and 2000.

So, what were the chances of a silver-price rise?

To answer that question, we need to look at two factors. One is what drives silver prices and the second is what is the relationship of silver to gold?

In fact, the two are intimately related, but we will come to that in a moment. First, the demand for silver is primarily industrial – about 60 per cent is used for a range of industrial applications including electrical components and precision instruments. In contrast, the equivalent figure for gold is about 10 per cent.

Neither of these figures includes jewellery demand: 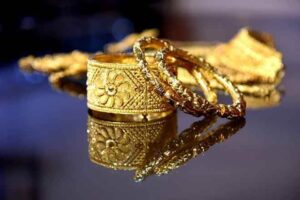 Allied to this is the fact that silver tends to be pulled out of the ground not in response to the normal price signals telling of increased demand for the metal but as a by-product of the mining of other metals, such as lead, zinc and copper. About 70 per cent of supply is produced this way, which means the market is prone to being glutted, not least because increased demand for these other metals produces more silver, regardless of whether anyone actually wants it.

Second, the relationship of silver to gold. Bullion analysts keep a close eye on what is called the gold-silver ratio, which is, quite simply, the number of ounces of silver it would take to buy one ounce of gold. On average, this figure tends to be about 60, the figure representing the division of the gold by the silver price.

For anyone looking for a silver-price rise, this is good news indeed. Traditionally, the higher the ratio, the greater the likelihood of bullion traders and investors switching out of gold and into silver, given that, they believe, gold is overvalued and silver under-priced.

But any serious piece of silver price-performance analysis would note that there is nothing automatic about this. Particularly in times of crisis and financial stress, as we are currently living through, gold’s expensiveness relative to silver can seem of much less importance than gold’s unique role as a store of value and a universally accepted monetary asset. Silver may be a precious metal, but never came this close to gold in this regard.

Ordinary Americans were banned from holding investment gold from 1933 to 1974, thanks to the brothers Bunker and Herbert Hunt, who tried to corner the silver market at the end of the Seventies. It didn’t end well, thus silver was seen as a ready substitute for speculators. Decades later, there are those who remain its diehard fans.

As we saw, the price has been generally rising for five years. Who would have bet against it continuing to do so?

Against the background of the ongoing Covid-19 pandemic and increased economic uncertainty, Gold had become a go-to asset for many investors looking to diversify and hedge their portfolios.

But what about its less precious sister metal, silver?

Over the past few months, gains in silver prices have lagged those of its yellow peer. While gold soared by almost 18 per cent year-to-date, the white metal had inched higher by a shy 3 per cent.

Nonetheless, with the market remaining firmly uncertain, silver well positioned itself to eventually surge to fresh highs as of 28th July 2020.

The fall and rise of silver in comparison to gold: 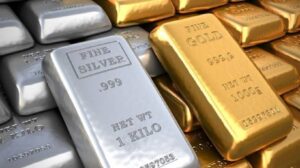 The metal had a somewhat good time in 2019, with its price surging more than 15 per cent and many analysts predicting it to have a great year ahead. According to the silver price trend chart, in September 2019, its value reached highs of $19.50 per ounce and ended the year at $18 per ounce.

In 2020, however, financial markets were turned upside down. At the beginning of the year, silver saw its price skyrocketing amid the reports of a US airstrike killing a top Iranian general and Iranian missile attacks on US military bases in Iraq. As frightened investors ran to safe-haven assets, the metal hiked past the $18.83 mark for the first time in almost four months. But once the tensions between the nations de-escalated, the commodity dropped to its previous lows of $17.81.

Shortly after, the pandemic hit the world, influencing not only the performance of silver but all global markets. Silver prices quickly shed 38 per cent to hit an 11-year low in March as the start of Covid-19 lockdowns saw investors quitting their positions in favour of cash

With risk aversion growing and industrial production being heavily reduced, silver, known for being both a safe-haven asset and an industrial metal, faced heightened volatility. On March 16, the spot price fell below $12 per ounce, reaching its lowest level since 2009. Over the next few weeks, the metal recovered to trade around the $15 per ounce level.

The following rally in prices took many investors by surprise, with the commodity ending May at $18.50 per ounce driven by high demand for safe-haven assets and anticipation of recovering industrial consumption. As of July 9, the metal changed hands at $18.63 per ounce.

While the silver price looked rather optimistic, we were about to see a massive surge on 28th July 2020. 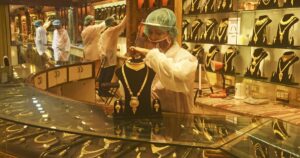 India is the largest importer of gold, which mainly caters to the demand of the jewellery industry. In volume terms, the country imports 700-800 tonne of gold annually.

The government, in November last year,  announced that hallmarking of gold jewellery and artefacts would be made mandatory across the country from January 15, 2021. But amid the coronavirus crisis, the All India Gem and Jewellery Domestic Council (AGJDC) and the India Bullion and Jewellers Association had demanded the extension of the deadline.

Hence, the Government had extended the deadline by over four months. Now the entire market awaits as certain timely policies make way for the investors and consumers.