Hong Kong’s SFC (securities and futures commission) which is like India’s SEBI has recently been questioned by Hong Kong police for their responsibility in the frauds done by next digital which is very conveniently a media publication just like us and many others.

What fraud you ask- 15 people were allegedly manipulating Next Digital’s stock price and they have been arrested under National Security of Law.

The 15 individuals were said to have earned HKD 38.7 million (USD 5 million) from trading Next Digital shares over three days by creating the illusion of many people trading and then posting social media messages to lure other investors, before selling their positions at a higher price. Wow right?

But as Indians have you thought how safe are we from this malpractice. Well we do sleep peacefully knowing that there’s a Security Exchange Board of Control making sure these glitches don’t happen. Yet India has witnessed maximum frauds and scammers in the past as well as current decades than any other developing nation. 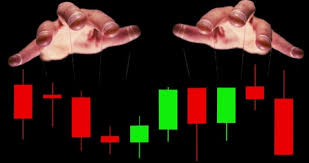 As long as there have been markets there has been market manipulation. In today’s time broadly speaking there are two ways people attempt to manipulate stock prices. One is structural. Traders are allowed or at least rarely have ever been punished if a trader has a large position in a stock they would like to sell.

They may attempt to show strong, buy interest in the stock by showing large and buy orders in the market. Other market participants see those buy orders and some will buy stock causing it to rise and the person with the large position is able to sell at higher prices

It makes less sense if you are just told that something like this happens but more sense to identify this type of behaviour. If one closely watches what is called the tape for manipulation and trade the stock accordingly.

The second way the stocks are manipulated around is by creating stories about a company. Hedge funds have been doing this for decades. This was exposed when a very well-known Hedge fund manager revealed some of the deep rooted techniques.

They’re able to plant stories with news outlets and in the current age they can use social media platforms to very quickly and widely disseminate their stories. One of the recent such real life incident happened with none other than Elon Musk’s Tesla Shares.

National Highway Traffic Safety Administration had received an “anonymous” email complaint alleging that TESLA cars were defective and the news medias started pounding on to that without any further research. This false news allegation spread by what is speculated to be a rivalry in automobiles actually reduced TESLA’s share price by $7 and increasingly throughout the day.

Although the Wall street journal was quick to cover up its(manipulation) traces by releasing a statement saying that- “there’s an investigation and that’s what’s causing the lowering gaps in stock.”

Did you know: Tesla is the most heavily shorted stock in the United States. The value of Tesla’s short position is over 10 billion dollars.

However, the “still anonymous e-mail sender” knew that the National Highway Traffic Safety Administration (NHTSA) will release a Public statement to TESLA and then there will be a flurry of headlines and those headlines will encourage people to sell the stock and their losses will become less. Hence in layman terms making the market fall for Tesla shares.

Even on that day many could argue that Tesla’s shares are perhaps the strongest stock in the market. Some buyers are in control and have a positive psychology. So that’s kind of a backdrop that we’re looking at when such news breaks out early in the morning with the fake complaints being filed with a Federal Government agency.

Who is responsible for keeping it in check?

Manipulation of stock market is actually not very new either. The companies that are listed on our exchanges listing requires a whole bunch of rules and obligations disclosures. There has to be constant reporting of everything that happens. Even if a company is meeting analyst it has to disclose this to the exchange board. Give a timetable of the meetings as well as what was discussed. That strict!

But if things are so tight and if there are not one not two but more than three corporate governance committees that have sat and created more and more paperwork and disclosures and checkboxes and regulations ostensibly for good governance that how and why is stock manipulation so rampant?

There have been many “whistle-blowers” who have done everything they can do to bring such company manipulations to the notice of SEBI and RBI. All of these are today studied as case study. Even today many few are actually working towards its eradication.  Many have found a way to use this to their advantage as well.

These case studies of previously exposed companies don’t really make a difference because there are hundreds of companies involved in its happenings.

There are many people angered especially youngsters with such malpractice manipulation news. But what is more devastating being that the regulator spends crores of rupees (mostly taxpayer’s) refining a software that’s “supposed” to flag even the tiniest spikes in stock prices. Patterns and trends are identified by the software and it is supposed to go after insider trading.

Enriching the system or eradicating it from the roots?

In fact, from time to time, we hear from the Securities and Exchange Board of India that they are planning to use artificial intelligence to look at social media posts and keep the insider trading in check.

Now take a look at how brazen is this particular story where a whistle-blowers attempt to reach out to the regulator to either by email phone for seeking appointment just draws a blank. The regulator however played a blind eye to everything going on in that particular case.

JA global is a company which is listed on that National stock exchange as well as Bombay stock exchange. These are considered elite companies listed on both national exchanges. It’s supposed to be in to non-renewable and renewable energy development.

What it did is, they constantly made disclosures. Now that’s a good thing right? Here’s the great thing -every time Control Board tightens the rules it imposes more and more disclosures on listed entities

Some of these companies are using those very disclosures to con people.

What is happening is it’s not just about the company’s stock price moving up and down and being manipulated- one rupee something the max limit it had risen to in the last one year is about 11 rupees now after it has been manipulated a couple of years’ back.

Remember that 1 rupee – 11 rupees – not a big deal but percentage terms is a lot of movement and that is obviously why a stock like this with its profitability so low, its net profits at just about 1 crore it shows a turnover of about 130 crores in the latest year. Nobody suspects anything until there are sudden disclosures like what happened to PMC bank.

But what about the stock market researchers?

If you look at the stock price chart, over the last one year there’s a lot of price movement and what is interesting is the biggest websites which have message boards which discuss talks say that the previously mentioned JA global is a stock in the news. It is all over those websites and there are websites that are created which are made to look like respected websites with similar names where there are “Research Reports” on this company.

Most of the research reports can’t be doing serious reports and they just vanished. So whenever SEBI wants to look at it, it vanishes. This is happening in broad daylight on the most booted websites. Even reputed websites like money control stock said that JA global is in the news and 60% of the people who are looking at the stock are recommending a buy. But what about the consequences and who will be responsible?

What is the meaning of having a whole bunch of rules for his listed companies if this manipulation can happen with such liberty?  This is not all the problem. Most of these companies cannot seem to retain CEOs, company secretaries and compliance officers.

In fact, their disclosures to the exchange show that these CEO’s are resigning due to personal reasons. What we know is that companies listed subject to the most stringent disclosure requirements are disclosing whatever they want to with adulteration because nobody cares and nobody checks.

This is why market manipulation carries on and nobody is any the wiser. Unfortunately, there are very fond wave of youngsters who get lured into it. Lose their shares because they think that a hundred percent jumped from one rupee to three rupees or one rupee to five rupees is going to make them rich. It won’t because there are not enough shares available for you by the quantities that you require to turn rich overnight. One can avoid stock market trading thinking- “it’s not my cup of tea”. But this cannot be an excuse for the regulators who are not doing their jobs.

Author’s Note : Scams and News like these are a humble reminder that our financial systems and stock market are extremely vulnerable to manipulation. It also teaches us that when the valuation of company starts to get on the crazy side, smart investors should start getting cautious instead of getting greedy.