International Business Machine Corp. or IBM is planning to divide the company into two separate ones so that they can focus on cloud computing, according to the company. The company that popularised modern computing as we know it, says that they will complete this division process by the end of 2021. The company says that they would list information technology infrastructure services as a separate company and are also planning to do so with a new name. According to a company statement, this new separated unit which still works together with the global technology services division serves 4,600 clients and has an order backlog of $ 60 billion.

Arvind Krishna, chief executive officer, IBM said on a call with analysts, “Today is a landmark day for our company. We are redefining the future of IBM.”

This new plan comes as the officials try to revive the legendary company. The future of the once-great company now depends on cloud computing as they have shifted their aim now to become a leader in hybrid cloud software. The CEO of the company Arvind Krishna said, “We divested networking back in the ’90s, we divested PCs back in the 2000s, we divested semiconductors about five years ago because all of them didn’t necessarily play into the integrated value proposition.”

IBM once stood at the pinnacle of technology with innovations that influenced modern computing largely. However, as time passed, the company could not keep its pace up with the fast-changing technology. Recently, the company also reported that software sales and mainframe server demand have also gone down. They now take the decision to overcome the shortcomings of the software sales through cloud computing. The CEO of the company said that the software and solutions portfolio will account for the majority of company revenue after the separation.

News agency Mint reported comments of IBM executive chairman Ginni Rometty, as he said, “We have positioned IBM for the new era of hybrid cloud. This focus will result in greater value, increased innovation, and faster execution for our clients.”

IBM has struggled recently as a large number of companies who were their clients delayed purchases of information technology or software upgrades to focus on short-term stability and cash preservation to survive the pandemic. The company had also cut jobs of thousands of employees as they reshape the company.

The company also stated that after the separation of the two units, initially, they would pay a combined quarterly dividend which is no less than IBM’s re-spin dividend per share. The company expects third-quarter revenue of $17.6 billion and an adjusted profit per share of $2.58, in line with Street estimates.

The American multinational technology company has its headquarters in Armonk, New York. The company was founded in 1911 by the name of Computing-Tabulating-Recording Company (CTR) and got rebranded as International Business Machine Corp in 1924. The company for a large part of its history focused on producing and selling computer hardware and software. The company also has major inventions under its name. Some of the inventions include the floppy disk, the hard disk drive, the magnetic stripe card, the relational database, the SQL programming language, the UPC barcode, and dynamic random-access memory (DRAM). The company is one of the 30 companies included in the Dow Jones Industrial Average and one of the world’s largest employers. As of 2019, the company had over 352,600 employees. IBM employees for their several inventions have been awarded five Nobel Prizes, six Turing Awards, ten National Medals of Technology (USA), and five National Medals of Science (USA). 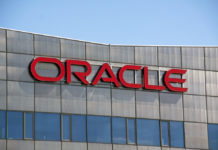 Oracle unveils first India data centre in Mumbai; to open another in Hyderabad next year