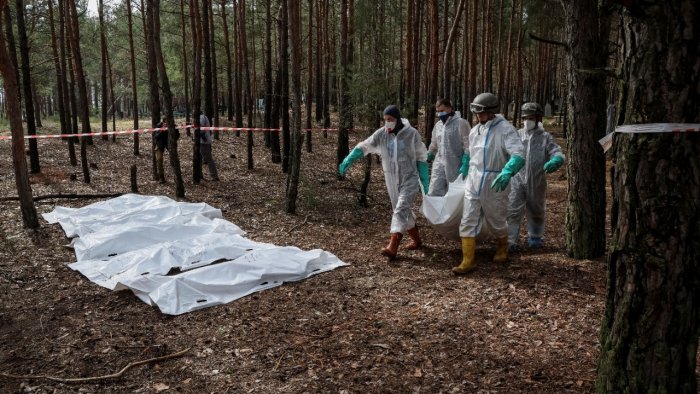 Hundreds of graves had been dug in the pine forest at the edge of Izyum city in Ukraine as the mass exhumation got under way.

As per the Ukrainian officials, the site has over four hundred new graves, and some contain more than one body.

The horrifying visuals of the inhumane and unprecedented impacts of war have filled the woods with the stench of death. Convoys of international journalists were brought to witness the event.

The president, Zelenskyy, wrote in a Telegram post on Friday: “The whole world should see this.”

“Murders. Torturers. Deprived of everything human. You won’t run away. You won’t hide. Retribution will be justly dreadful. For every Ukrainian, for every tortured soul” he added.

Officials said one grave contained around twenty soldiers. The signs of torture were quite evident as some had their hands bound and one soldier had a noose around his neck. (BBC)

The European Union (EU) presidencies have called for the establishment of an international tribunal for war crimes following the recent discovery of mass exhumations in Ukraine.

Jan Lipavsky, the foreign minister of the Czech Republic, which holds the EU’s rotating presidency, said: “In the 21st century, such attacks against the civilian population are unthinkable and abhorrent.”

Russia left behind mass graves of hundreds of shot and tortured people in the Izyum area. In the 21st century, such attacks against the civilian population are unthinkable and abhorrent. We must not overlook it. We stand for the punishment of all war criminals. #StandwithUkraine

In addition, he wrote in a Twitter post on Saturday that “we must not overlook it. We stand for the punishment of all war criminals.”

The US secretary of State, Antony Blinken, mentioned that the site of the burials is likely to provide evidence against Russia for committing war crimes in its pro-western neighboring nation.

The French president, Immanuel Macron, joined the condemnation as he tweeted: “I condemn in the strongest terms the atrocities committed in Izyum, Ukraine, under Russian occupation.”

Additionally, the discoveries were made more than five months after the Russian army had been driven from the vicinity of Kyiv, the Ukrainian capital. As it left behind hundreds of civilians dead and a significant number of whom bore the traces of torture and summary executions.

Ursula von der Leyen, the chief of the EU, stated on Thursday that Russian President Vladimir Putin ought to face the International Criminal Court (ICC) over war crimes in Ukraine.