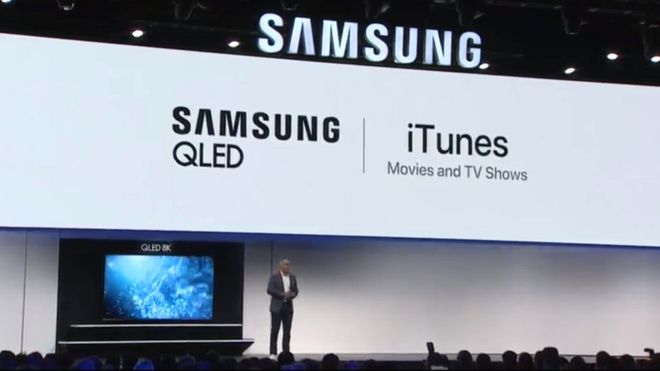 Samsung recently collaborated with Apple to support Airplay 2 on its smart TVs. The arch-rivals have together for a deal that will result in features like iTunes and AirPlay 2 to be compatible with Samsung’s TV line-ups.

The beginning of CES 2019 has seen Apple shifting towards turning into a tech and media company as the sales of iPhone fall an all-time low. Last week Apple said the iPhone sales missed the expectations for the holiday quarter, which shocked the investors. The company pointed to an all-time record services revenue of $10.8 billion for the quarter which is a massive miss from expected revenue.

It’s “further evidence that Apple is willing to change its hardware-first approach and work with third parties to boost services revenue,” according to Gene Munster, a longtime Apple watcher.

Samsung’s senior executive Dave Das while addressing the CES tech show said the move to collaborate with Apple was “a true first”.

It is interesting to note that Apple and Samsung have been rivals for years now. Both the companies have indulged in legal wars over smartphone patents, with Apple accusing Samsung of copying iPhone’s design. After a number of trials and Apple acquiring millions of dollars, the two companies settled in June 2018, ending litigation.

However, beyond lawsuits and litigations, the two companies have shared a close partnership as well. With Samsung providing components such as screens for Apple’s high-end iPhones, the companies have always stayed in touch. Apple is currently working on developing its own future screen technology in an attempt to restrict its reliability on Samsung.

Apple added its support for iTunes on Samsung TVs just a week after Apple opened up Apple music to Amazon Echo. It is clear that the iPhone maker is looking to expand its territory on its other arms and not rely solely on iPhone sales.