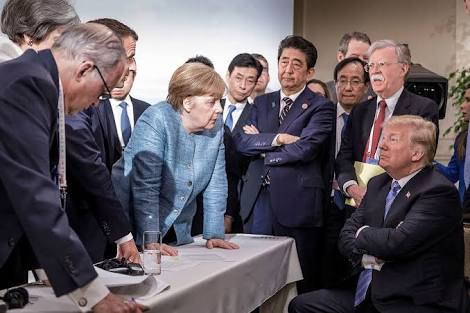 Donald Trump is one leader who knows how to stay in news, even if it is for all the wrong reasons. The recently concluded annual meeting of the world’s most powerful industrialized countries, the G7 Summit, was a testimony to the above statement.

The Group of 7 or G7, as it is called, is a conglomerate of Japan, France, United Kingdom, Germany, Canada and the US which meets every year to discuss stance of member countries on issues like global security, international economy and climate change. Its main motive is to make collaborative efforts in different spheres to support the developing and the underdeveloped countries and to address the pressing issues mainly concerned with climate, economy and security. 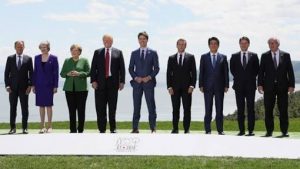 Following the norm, this year the summit was held at Quebec, with Canadian Prime Minister Justin Trudeau acting as the host. However, this year’s summit was more of a controversial show than a discussion forum, thanks to Trump’s isolated stands on world issues against a unanimous front of his own allies. The signs of a possible imbroglio at the summit were visible way before the summit began, with Trump’s statements on the tariff on steel and aluminum and his insistence on making the Group of 7 a G8 by reassimilating Russia into the bracket of developed and highly industrialized nations.

Things went further downhill when Trump got into a war of words with Trudeau over the imposition of huge tariff rates on the import of steel and aluminum on EU and Canada, with Trump justifying them. Trump’s disinterest in the summit was apparent from his late appearances in key events, such as the gender equality event and his early flyback skipping the very important climate change summit event, owing possibly to his greater regard to the meeting with Kim Jong-un in Singapore scheduled immediately after the summit.

Trudeau, in a press conference following the summit said, in a strict tone, that Canada is polite and reasonable but not one to be pushed around. He also asserted that the summit was held peacefully with all countries having signed the communiqué, a document instating the key decisions taken during the summit and policies agreed upon by all the member countries. These comments were taken in bad taste by Trump who lashed out at Trudeau for making false statements at the conference and decided not to endorse the communiqué. This was expressed by Trump in a two-tweet-long harangue on his flight over the Pacific.

Trump’s blow-up was condemned by nearly all other member countries, with British Prime Minister Theresa May calling it a ‘difficult’ summit in her address to the House of Commons and German Chancellor Angela Merkel describing Trump’s behavior as ‘sobering and slightly depressing’ over the discord between Trump and the other leaders.

This was not the first time that the G7 summit was embroiled in controversies. In the recent past, in 2014, Russia which was a part of the then Group of 8, was suspended from the forum following its annexation of Crimea. More recently, in 2015, with Germany as the host country for the summit and despite several measures taken by the host to avoid any glitch, a group of protestors going by the name ‘Stop G7’ managed to cause unrest in the summit questioning the legitimacy of the G7 to make decisions that would affect the whole world.

While the implications of the non-involvement of the US and its disruption of the summit cannot be predicted just now, one thing that came out of the summit and which actually summed up the entire summit was the famous picture of Angela Merkel and Donald Trump breaking the internet. In the picture, Angela Merkel is seen standing in an authoritative position with hands on the table surrounded by other prominent leaders facing an apparently adamant Trump sitting stubbornly with folded arms. The picture is a proof of the ‘G6 versus G1’ phrase doing the rounds since the conclusion of the summit and holds an important lesson for the member countries of strengthening their own economic and security independence lest be abandoned by the US anytime.