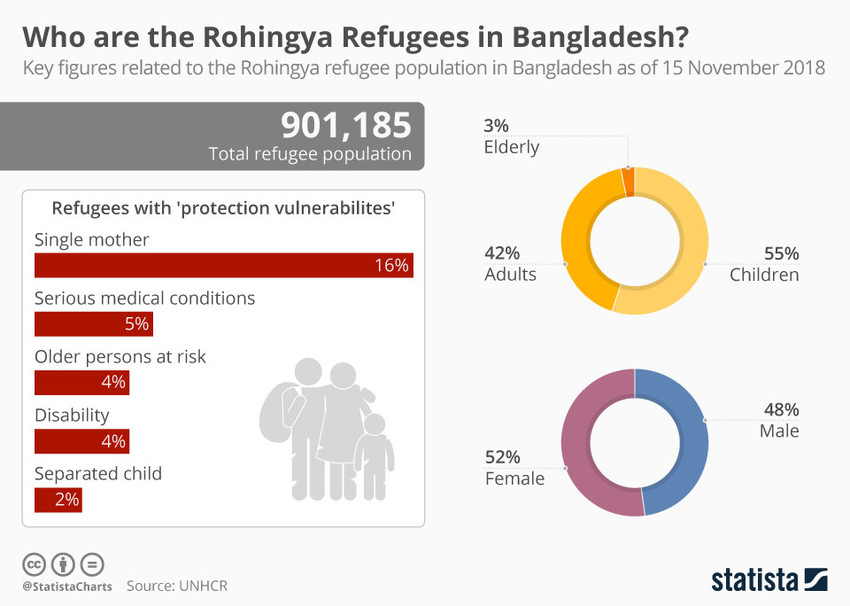 The battle against gender discrimination is gaining ground in developed and developing countries. Then why girls and women are the worst affected segment of the society when a country faces a war or conflict, or any sort of crisis for that matter. War does open all avenues of exploitation and has doubled the pace of marginalization in society.
United Nations’ Global Humanitarian Overview 2019 suggests that conflicts and natural calamities “exacerbate gender inequalities, particularly against women and girls.”

As a strategic tactic of war or conflict, rape or sexual violence has been used to terrorize and brutalize women. It turns out to be a bothersome trend as highlighted in the United Nation’s report. Two in every ten refugee women have experienced sexual violence. The worst part is that it has imminent physical and psychological effects on one’s body, as it leads to crippling mental health conditions, stigma, unwanted pregnancy, exposure to HIV-AIDS etc., which imperils the lives and future of women as well as their children.
The real number at which the graph is increasing is likely to be much higher. As one of the obvious reasons for that is untraceable data.

According to the United Nations Assistant Secretary-General for Human Rights, Andrew Gilmour, women are subjected to a “frenzy of sexual violence” by the Myanmar Armed Forces and local militant groups.
The report presented by the Secretary-General has highlighted the conflict-related sexual violence in 2018, said; “the widespread threat and sexual violence were integral to their strategy, humiliating, terrorizing and collectively pushing the Rohingya community and serving as a calculated tool to force them to flee their homelands and prevent their return.”

Historically, women have been a “soft target” in pre and post warrying conditions. Probably because of concepts like “family honor” and the “purity” of women, and because women are seen as the propagators of generations.
Specifically, in the case of ethnic cleansing, where women are seen as the soul propagators and the custodians of ethnic identity. The added repercussion of this tactic is an unwanted pregnancy, as we have seen in the Rohingya case study back in May 2018, some 40,000 Rohingya refugee women were pregnant, a “significant share”, as a result of rape.

During the displacement period, women and children are prone to psychological and physical effects on their health; this includes the risks of direct- physical injuries which lead to disabilities.
The people who are forced to flee from their homelands are vulnerable to lack of food, water and lack of basic necessities and medical care, and malnutrition and other diseases.
The lack of basic hygiene and sanitation facilities might lead to deteriorated health of women and children, especially infants. In most of the cases, all this leads to abortions, low birth weight, and high mortality rates.

Dissecting this topic with the help of the example of conflicts going on in Afghanistan. The destruction of educational institutions targeted by artillery fire has ruined the future of many children. Adding on, girls tend to drop out due to forced migration. The situation of violence and aggression among children in schools worsens the atmosphere for students. Furthermore, the unavailability of awareness centres and educational programs for women spikes up the maternity deaths in conflict-prone areas.

History writings have suggested that the role of women changes in post-conflict economies as their activity increases; they tend to be involved in low-paid and unskilled or low-skilled jobs. The economic opportunities that are open to women are often shaped by society, culture, traditions, and access to resources. The households, in which women are the primary breadwinners, are more vulnerable to the risk of poverty.

Be it war, or conflict, both have devastating effects on women as compared to men. The nature of the conflict determines how horrendous it will be for women and children. It’s hard to quantify and access the impacts on a woman. Therefore, there is a need to work upon the landmark resolution, adopted by United Nations Security Council in 2000, Resolution 1325. It calls for, increased participation and representation of women at all levels of decision-making. As the concerns of women should be put forth and tackled by a woman.