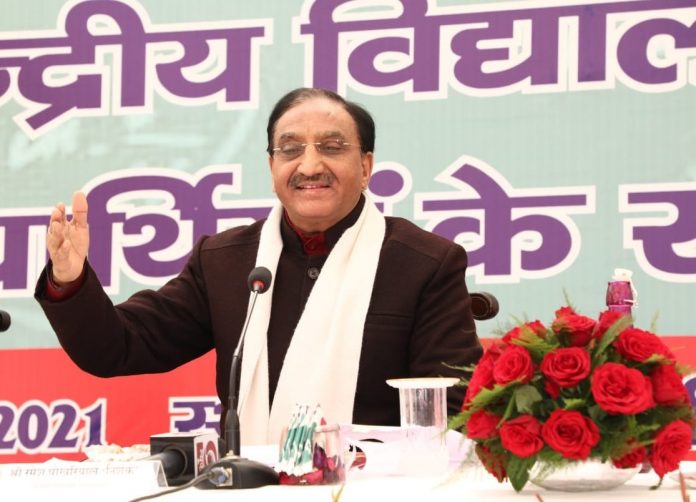 New Delhi: Amid the news of school reopening, Union Education Minister and Chairman, Kendriya Vidyalaya Sangathan Ramesh Pokhriyal ‘Nishank’ virtually interacted with the students of Kendriya Vidyalayas across the Country on Monday.

Ramesh Pokhriyal took to Twitter and wrote, “Thank you all #students from @KVS_HQ who attended Shiksha Samwad today. It was a heartwarming experience to interact with the bright young minds. Interacted on various topics such as #board exams, #mentalhealth, #COVID19 with the students across the nation.”

The Minister attended the program from KV Andrews Ganj, New Delhi, and answered the queries of the students.

Replying to the query by a student of KV Gurugram, Pokhriyal informed that as the curriculum was cut by 30 percent this year due to COVID-19, therefore in the upcoming competitive examinations like JEE and NEET this year the candidates will have more options to answer the questions.

In response to another query asked by a student from Varanasi, he said that the facilities of online education will continue even after the school reopens. For some time, a mixed format of online and offline will be available for the students.

In response to a question asked by the student of Kendriya Vidyalaya Andrewsganj about the New Education Policy- 2020, the Minister said, “New Education Policy has been prepared to keep in mind India of the future. A lot of emphasis has been laid on practical knowledge rather than just bookish knowledge. The vocational training facility will be provided for students from class 6 onwards, with which the internship is also associated. Artificial intelligence will also be taught from the school level itself. At the same time, Indian values ​​and culture will also be promoted. This policy is capable of realizing the dream of AatmaNirbhar Bharat.”