The topic they chose to debate on was ‘Social Media Is The New Courtroom For Justice’. Rashmeka spoke in favor while Paras spoke against. There were other IIM Calcutta students who participated and represented the Institute, namely Arpit Agarwal, Utkarsh Thakur, but among these and seven other teams participating from across Eastern India, Rashmeka Banerjee and Paras Gala emerged to be the winners of the competition and will be awarded 2-month internship with Observer Research Foundation.

Speaking about the topic, Paras Gala, a Doctoral Student from IIM Calcutta said, “Social Media, by the very nature of the way its algorithms function, tends to trap the users in filter bubbles and echo chambers that further create even more polarization.” 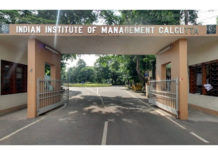