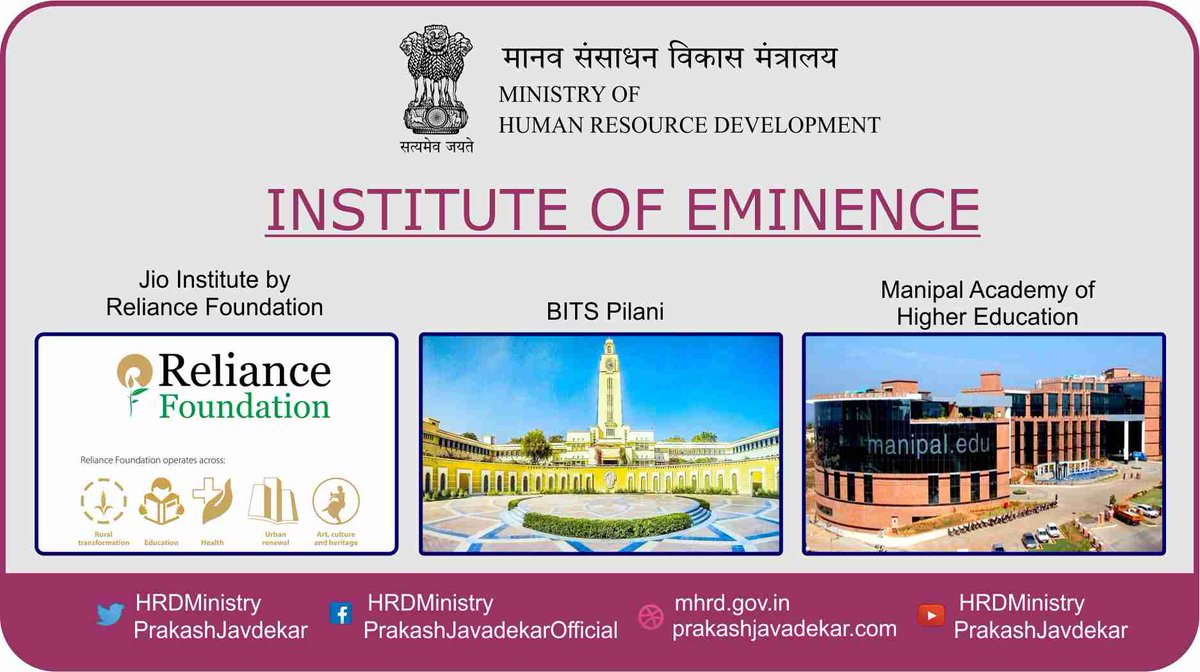 The Jio Institute was on the elite list of six institutes announced by Union human resources minister Prakash Javadekar in a series of tweets Monday along with two IITs, the Indian Institute of Science and two others. To this, the government said, the Jio Institute of Reliance Foundation isn’t an ‘Institution of Eminence’ yet, said the government on Tuesday after it was criticised for giving the tag to an institute that is “still on paper”.

During Question Hour in the Rajya Sabha, several members sought clarity on the criteria on the basis of which the prestigious title was conferred on select institutions. HRD minister Prakash Javadekar said a committee of experts had made the selections after a thorough scrutiny. Javadekar categorically told the House that the Jio Institute has not been declared an ‘Institution of Eminence’.

As per the all-India survey on higher education (AISHE) for 2016-17, 20.1% posts of college teachers were lying vacant in rural areas, while the deficiency was 29.5% in urban areas. Altogether, there were 3, 06,017 vacancies, with 1, 37,298 of them in rural and another 1, 68,719 in urban areas. But it was the controversy over whether the IoE tag had been given to the yet-to-be-established Jio University that dominated the questions, with several members expressing concern over the development.

R Subramanyam, secretary in the Department of Higher Education, backed Gopalaswami’s view. “As Jio institute is starting on a greenfield mode, they will only get a ‘Letter of Intent’, which states they must set up their institute within three years. If they do set up, then they get the ‘IOE’ status, right now they don’t have the tag, they only have the ‘Letter of Intent’,” said Subramanyam.

Subramanyam said Jio Institute had been given IoE status under the category for greenfield private institutions. “These are institutions that do not exist right now, but well-meaning, responsible private investors want to bring global standards to the country. These should be welcomed,” he said.

“The illusionary JIO Institute which is yet to see the light of day has been declared as an ‘eminent’ institute. The Govt needs to clarify the basis of classification for granting such a status. #SuitBo…” the Congress tweeted.

According to UGC regulations, the HRD ministry was to select 20 IoEs–10 public and 10 private–that will enjoy complete academic and administrative autonomy.

A committee headed by Gopalaswami picked the six institutions that showed the potential to find a place among top 500 of global rankings. The inclusion of Jio Institute riled many. Ayesha Kidwai, a professor at Jawaharlal Nehru University, pointed out to the “conflict of interest”.

“It doesn’t have a campus, a website or any alumni and it has left behind prominent IITs as well as private players like Ashoka University and OP Jindal Global University. It is yet to be established but will already be marketed as a world-class institution by the government. Can’t we see the conflict of interest?” Kidwai said.