Even in its sixth week, Ali Abbas Zafar’s Tiger Zinda Hai is making humongous profits at the box office. The movie has made a total of 25 lacs just on the sixth Monday of its release.

Prior to Tiger Zinda Hai, Salman’s another blockbuster Bajrangi Bhaijaan had made 1.49 crore net in its sixth week. Tiger Zinda Hai has superseded the success of the former by making a total of 1.94 crores in the sixth week.

The total earnings of the movie in its last count has been a whooping 337.39 crores which registers it in the 300 crore club making Salman the only Bollywood actor to have three 300 crore club movies including Tiger Zinda Hai, Bajrangi Bhaijaan and Sultan. 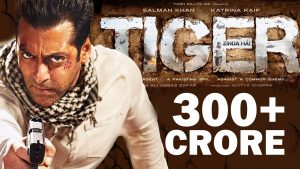 If it continues to make profits at the same rate, the movie might manage to make a total of 2.5  crores by the end of this week which will register it among the three movies to be able to do so in their sixth week, the other two being Baahubali 2: The Conclusion and 3 Idiots.

Looking at the fandom of the ‘bhai’ of Bollywood, nothing less can be expected from his movies’ commercial success.