Actor Abhishek Bachchan recently visited Qutub Minar in Delhi after a long time and got nostalgic on visiting this historic monument after a long time. He appreciated it’s beauty and commended it’s management for brilliantly maintaining it.

Abhishek took to Instagram to share couple of photos from his trip. He captioned this photo, “Getting to visit Qutub Minar as a child was a highlight whenever we visited Delhi. Even after all these years it’s still as beautiful and brilliantly maintained.
#AmazingIndia #incredible_india”

Getting to visit Qutub Minar as a child was a highlight whenever we visited Delhi. Even after all these years it's still as beautiful and brilliantly maintained. #AmazingIndia #incredible_india

Another photos of beautiful design at the ceiling:

On the work front, Abhishek is currently working on a film with director Anurag Basu. The film, described as a dark comic anthology, will also feature Aditya Roy Kapur, Sanya Malhotra and Fatima Sana Shaikh.

Earlier there were rumors that the films is sequel to the 2007 romantic-drama “Life In A…Metro”, however Anurag has cleared air on it and said there is no truth to it.

There was an another report saying that the film is titled ‘Ludo’ and it will have a similar storyline as ‘Life in a Metro’ and that Vidya Balan is going to do a cameo in the film. 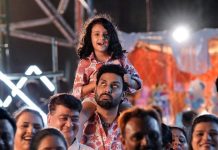 Abhishek Bachchan discharged from hospital after long battle with Corona