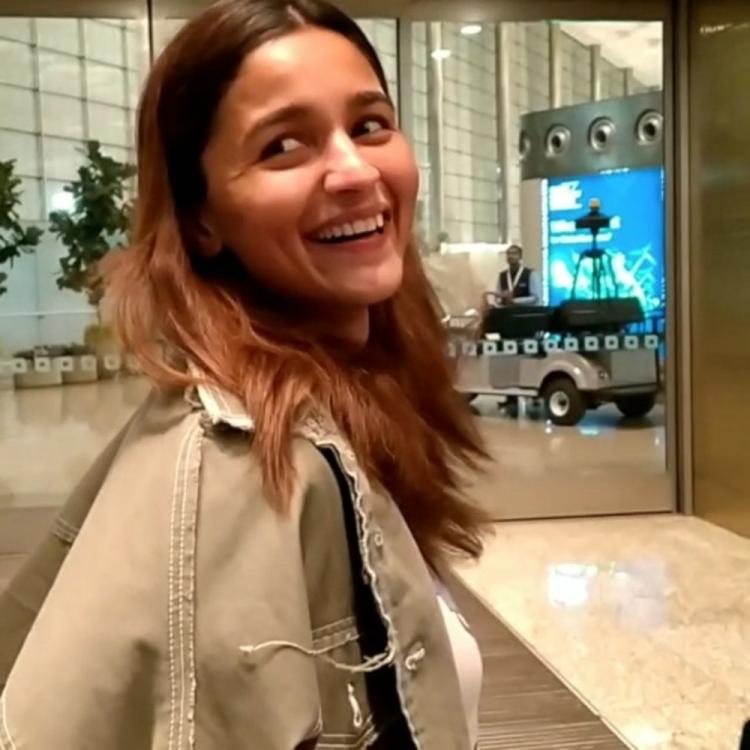 Alia Bhatt is the talk of the town for a few days for two reasons, first, she is getting a good number of projects in her kitty and second is her and Ranbir’s relationship. Every now and then they are seen together. A few days back there were rumors about Alia and Ranbir’s wedding date. A fake wedding invitation rolled on the internet and went viral among Alia and Ranbir’s fan clubs.

Though the invitation looked fake in the first place and had multiple grammatical or spelling mistakes but it caught wildfire. Alia Bhatt was spotted at the airport last night, she was heading to London in a cheerful mood. The Raazi actress donned the airport look with a red jogger with a cream-colored jacket and white tee inside it. She looked super cute. The gorgeous star walked towards the airport gate and then, was quizzed by the paps about the same.

While Alia was papped by a paparazzi and quizzed about her wedding date, Alia laughed out loud and couldn’t say anything. A photographer quizzed the Highway actress, “Madam ek khabar mili hai, confirmed hai kya? 22 January 2020.” To this, Alia laughed out loud and kept walking towards the gate of the airport all smiling and blushing. Later, the Raazi star turned to the pap and blushed a bit and said, ‘Umm…Kya Batoon,’ and then walked off. Alia didn’t say anything further on the matter, but a source close to the actress spoke to The Quint and mentioned that the news was fake and nothing about it is true.

Talking about Alia Bhatt’s upcoming projects, Alia is shotting for her and beau Ranbir Kapoor’s first collaboration, Ayan Mukerji’s Brahmastra. While she is also simultaneously shooting for Sadak sequel Sadak 2.