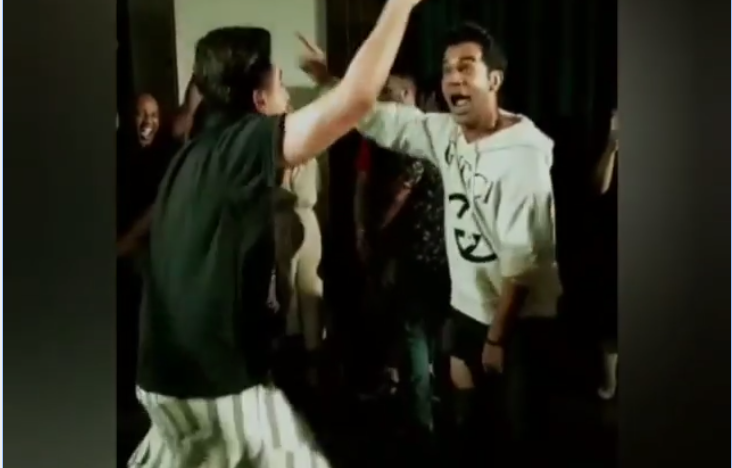 Bollywood has gone through a change in recent times, whether it be concept, script or actors; new faces and trends have taken place. Movies now are not just about the heroic persona of the protagonist but also focuses on the message it delivers to the audience.

Speaking of the trend, we have two actors from the hindi film industry who have emerged in recent times and are known for their brilliant acting and off-beat scripts. We are talking about Rajkumar Rao and Ayushmann Khurrana. The duo also shared screen together in Bareilly Ki Barfi and their on-screen camaraderie was worth-watching.

However, what we are truely in love with is their off-screen chemistry. The duo shares a great rapport and takes out time from work to hangout with each other.

Last night, Ayushmann and Rajkumar were spotted burning the dance floor with their moves as the latter attended the success party of ‘Bala.’ The duo owned the danced floor to Let’s Nacho from Alia Bhatt and Sidharth Malhotra starrer Kapoor and Sons.

Both the actors reminded us of two best friends in every party who are lost in their own world and impress everyone with their dancing skills. The Bala actor Ayushmann and Stree fame Rajkumar are indeed party lovers!

The dancing video of both the actors is going all around the internet and netizens couldn’t keep calm. Some people called them ‘Slayers’ while the others came up with ‘Superstars of Bollywood’.

Check out the video

100 per cent certified terminators of the box office #AyushmanKhurana #rajkummarrao 🔥🔥🔥🔥🔥

On professional front, Ayushmann is currently enjoying the success of Bala and will be next seen in Shubh Mangal Zyada Saavdhan. Helmed by Hitesh Kewalya, the film also stars Maanvi Gagroo, Jitendra Kumar, Neena Gupta and Gajraj Rao. The team has recently wrapped the shooting and is looking forward to the release. Ayushmann is also working on Gulabo Sitabo alongside Veteran actor Amitabh Bachchan. The film is slated to hit the screens in 2020.

On the other hand, Rajkumar will be next seen in Dinesh Vijan’s Roohi Afza. The film stars Janhvi Kapoor in the lead opposite Rajkumar. The actor is also working on Ajay Devgn’d Turram Khan. The film will be directed by Hansal Mehta.