Work is a non-stop process once it starts, and actor Vaani Kapoor can vouch for this fact. She is on route to Chandigarh, after completing the shoot of her next film with Akshay Kumar, Bell Bottom. In Chandigarh, she will start the shoot of director, Abhishek Kapoor’s next untitled film, opposite Ayushmaan Khurrana.

This is the first time that Vaani is working with director Abhishek Kapoor, with whom she is excited to work with. Talking about working with him, in a statement released, she said :

“It’s a lovely heart-rendering film. I have always wanted to work with Abhishek Kapoor, being so inspired by his films this feels like an amazing opportunity to be part of his vision.”

While this is also her first time working with, Ayushmann Khurrana. When asked about him, she called him one of the most talented actors in the country.

The actor will reach Chandigarh soon so that she can, comply with all necessary quarantine measures, to start work soon. The film will come out in 2021.

On the other hand, Vaani also has Yash Raj Film’s Shamshera in her kitty, which stars Ranbir Kapoor in the lead. While Sanjay Dutt plays the antagonist in the film. 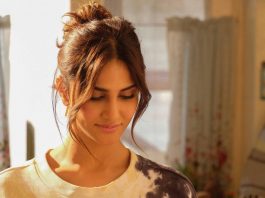