The Indian Wire » Entertainment » The Bhardwaj and Gulzar Duo is a New Favorite! 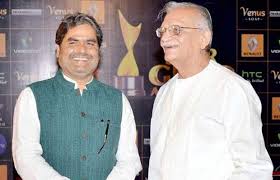 The upcoming movie 'Rangoon''s music album is another work of brilliance. The Bhardwaj-Gulzar team has always reserved its best for Bhardwaj’s own movies.

The upcoming movie ‘Rangoon’ directed by Vishal Bhardwaj starring Kangana Ranaut, Shahid Kapoor and Saif Ali Khan. Rangoon based on the life of Fearless Nadia finally hits the big screen nearly 10 years after it was conceptualised.

‘Mere Miyan Gaye England’ is a filmy qawwali that picks up snatches of the ‘Piya Gaye Rangoon’ melody. Rekha is in top form here too, delivering Gulzar’s flippant description of the flight to fight the war. Bhardwaj’s arrangement sounds almost A.R. Rahman-esque at times. The second interlude with the shehnais doling out a seemingly raag Bhimpalasi-flavoured solo is beautiful. ‘Yeh Ishq Hai’, a pensive piece sung by Arijit Singh, is evocative of ‘Dil Se Re’ and is one of the best songs of the soundtrack. Arijit’s fab and the guitar-laden arrangement is haunting. Bhardwaj takes the qawwali route for the female version sung by Rekha.

Bhardwaj and Gulzar pick up ‘Tap Tap Topi Topi’, which they created for the Indian adaptation of the Japanese cartoon series on Alice in Wonderland, and expand it into the whimsical sounding ‘Tippa’. Gulzar retains a large part of the original lines, adding to the song’s quaintness.

The Bhardwaj-Gulzar team has always reserved its best for Bhardwaj’s own movies. Rangoon is another such work of brilliance.

This is one of the most tropical music albums so far in 2017!