The Indian Wire » Entertainment » Bhuvan Bam in conversation with Forbes India Magazine; talks about perks and perils of influencer marketing and brand endorsements on social media Bhuvan Bam has added another feather in his cap. He has recently been interviewed by the Forbes India magazine, where he discusses the perks and perils of influencer marketing and how it works. 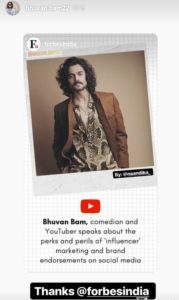 The interview is available on the website of Forbes India; however, it will be included in the magazine for the month of August. Bhuvan is asked a couple of questions. Bhuvan states that he doesn’t get the term influencer as he believes that nobody can influence anyone for anything. Also, he says that he would rather be called content creator/entertainer.

When asked whether these brand endorsements help both the endorser and the company, he agrees to it. The creators get the monetary benefits and probably that is why all these brand integrations are happening today. He further adds that people rarely follow any ethics these days.

He also talks about his upcoming ventures and how he has been backlashed by his viewers while endorsing brands.