A major news which might startle all Vijay fans has arrived. The Telugu superstar’s next film, Master is going to digitally stream on Netflix. The streaming giant acquired its rights although no news has come whether the film is going to skip a theatrical release altogether or not.

The anticipation around the film is sky high and Netflix offered a big amount for purchasing the film’s rights.

Earlier the film was supposed to hit theatres in April this year but because of the pandemic, got postponed. Reports then suggested that the makers might release it in theatres next year in January.

Now big questions will be asked about its release. The director of the film, Lokesh Kanagaraj had earlier said that the film will not release on any OTT platform first. It will release in the theatres only thereafter releasing on the OTT platforms.

His exact words were – “Vijay’s Master will only release in theatres. There is no chance of the film releasing on any OTT platform. We are waiting for the theatres to re-open in the country.”

On November 14 the teaser of the film was released which further soared the anticipation of Vijay fans. The film also stars Vijay Sethupathi as a villain. While Thalapathy Vijay awaits the release of Master, he is gearing to work in his 65th film too. That film will likely go on floors in February post Master’s release. 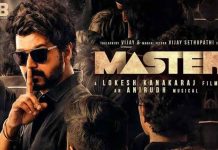