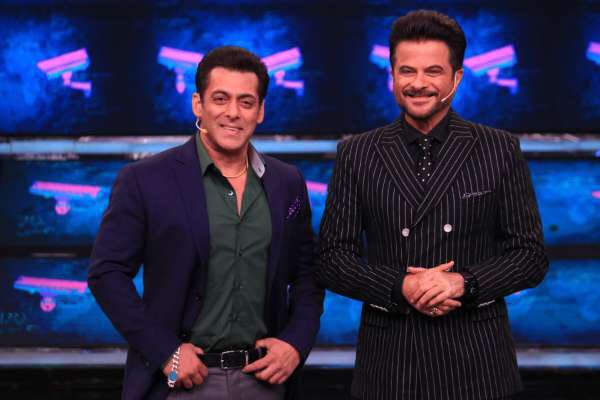 The episode began with the arrival of superstar actor Anil Kapoor. He was present to promote his upcoming movie, Pagalpanti. Salman Khan greeted him and then took him to the house through MeTV. All of the housemates were gathered in the living room, Salman introduced them to Anil individually while also giving description of their characters. He called Rashami Desai the Meena Kumari of the house, and Devoleena the bahu who became a babe after entering the house. He praised Shefali for playing well and asked Himanshu about his health. Anil and Shehnaz had a funny conversation in which she repeated the poem about his movie titles. Salman light movie Paras for his flirty attitude and made jokes about Asim’s fake english accent.

The housemates played a game in which Salman would ask a question, and if everybody didn’t agree with the contestant’s answer, he or she would be slapped by a machine. Shefali received slaps for her not considering Arti a serious player in the game, and for saying Devoleena didn’t deserve to cross to the next level. Next, Hindustani Bhau received slaps for most his replies because the housemates wanted to have fun. Paras was slapped for stating that Shehnaz is jealous of Mahira.

Anil Kapoor and Pulkit Samrat entered the house to play a game in which the housemates had to put a garland of banana around the person’s neck whom they though is most bawkas. Paras got the most garlands, 4, and was named the most Bakwas contestant in the house.

Urvashi Rautela and Kriti Kharbanda, who also star in Pagalpanti came to the stage with big Tiffins. They played a game in which Salman and Anil would have to give out bits of information about each other and whoever is wrong will have to eat the food from the tiffin.

At the end of the episode, Salman announce that Arhaan Khan was the contestant who got the least votes in the poll and he was evicted from the house. Rashami Desai broke down in tears when she saw him leave through the door.