After almost 600 artists of the film industry urging people to vote out BJP and its allies, more than 900 people from the film fraternity came up in the support of the ruling party. Pandit Jasraj, Vivek Oberoi, Rita Ganguli, and others on Wednesday issued a statement asking people to vote for the BJP and said the country needs a “Majboot Sarkar” not a “Majboor Sarkar”.

“It is our firm conviction that the continuance of government led by Prime Minister Narendra Modi is the need of the hour. Besides, when challenges like terrorism are before all of us, we need a ‘Majboot Sarkar’, not a ‘Majboor Sarkar’ and hence we need the present government to continue,” the notice said.

Shankar Mahadevan, Triloki Nath Mishra, Koena Mitra, Anuradha Paudwal and Hans Raj Hans are the ones who have issued the notice appealing the masses to vote in favor of PM Modi.

The statement said that during the last five years, India has seen a government which delivered “corruption-free good governance and development-oriented administration”.

A similar joint statement came last week from over 600 artists urging people to vote against the current government and vote BJP and its allies out. 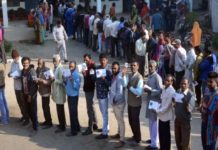