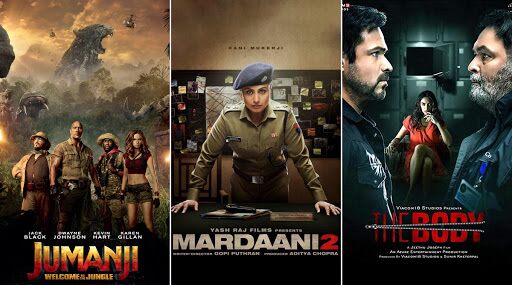 Hollywood  fantasy adventure comedy film Jumanji: The Next Level has beaten the two major Bollywood films released on the same day at the Indian box office. The American film fared better than the collective business of Mardaani 2 and The Body which is Rs 4.30 crore. Released on 13 December, Jake Kasdan directorial venture collected Rs 5.05 crore on its first day. The film collected Rs 1.15 crore on Thursday from paid previews putting the total collection at Rs 6.20 crore. The film is expected to perform even better on Saturday and Sunday as it is a multiplex movie.

Rani Mukerji starrer Mardaani 2 also came out on Friday after heavy promotional campaigns for weeks. The Gopi Puthran directorial opened to decent numbers and collected Rs 3.80 crore on its first day. The figure is decent but not good enough as it is only slightly higher than its prequel Mardaani’s collection (Rs 3.46 crore) which came out five years ago in 2014.

The film witnessed a slow start in the morning but picked up during the evening shows. According to a report on Box Office India, it is performing well in West Bengal and East Punjab. The other place where it did well was Maharashtra which is pretty much the trend of the last film. The mass centres of West Bengal and Maharashtra are pretty decent but it is the multiplexes in these pockets which are driving the film.

On the other hand, The Body, which stars Emraan Hashmi, Rishi Kapoor, Sobhita Dhulipala, and Vedhika opened to poor numbers at the box office. Based on Spanish film El Cuerpo, the Jeethu Joseph directorial could collect only Rs 50 lakh on its first day, according to a report on Box Office India.