King Khan of Bollywood, Shahrukh Khan celebrated his 55th Birthday yesterday in Dubai. To honor him on this occasion, the Burj Khalifa featured him on the building. Khan posted about this on social media, as he was elated to see himself on the “. “world’s biggest screen”.

The superstar is currently in Dubai with his family. As the Burj Khalifa displayed his photo, SRK posed in front of it and posted the photo on social media sites. He captioned it as :

“It’s nice to see myself on the biggest and tallest screen in the world. My friend #MohamedAlabbar has me on the biggest screen even before my next film. Thanks & love u all @burjkhalifa & @emaardubai. Being my own guest in Dubai… my kids mighty impressed and me is loving it.”

While the photo he shared is as follows –

King Khan is the ambassador of Dubai since 2016. He is in Dubai supporting his IPL team, Kolkata Knight Riders (KKR) though it is not a part of the play-offs anymore.

In his inimitable style, Shahrukh had posted a video on his birthday, thanking his fans and admirers for their wishes. He promised his fans that next year he will have a ‘bigger and better’ party with them, which did not happen this year because of Covid.

Khan last appeared in Anand L Rai’s Zero, which was released in 2018. Since then he is busy producing shows and films for Netflix while he is taking time to decide his next film. 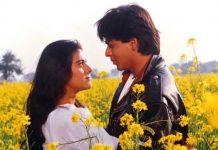