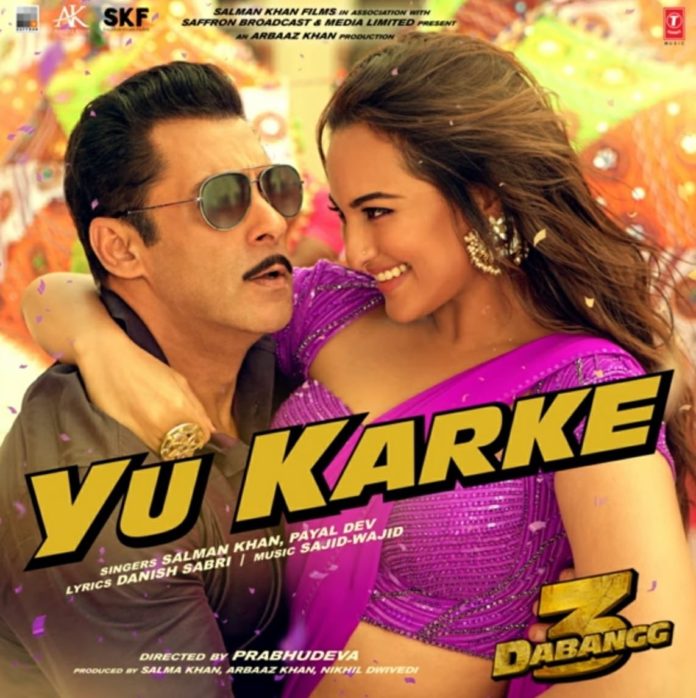 A new song, Yu Karke, has been released from the upcoming movie, Dabangg 3, and the make vocalist is, the star of the project, Salman Khan. Payal Dev is the female singer of the song, which is typical Bollywood masala dance number track and will surely enjoy a lot of popularity. This isn’t the first time Salman has used his musical talents, because his previous song credits include, Main Hoon Hero Tera for the movie, Hero, which was an unexpected hit. Salman is relatively new in the field of playback singing, but it seems that he’s confident enough to include the songs in his own projects.

Salman Khan is going to reprise his role as the idiosyncratic police officer, Chulbul Pandey in Dabangg 3, while Sonakshi Sinha is coming back to the role that made her famous, Chulbul’s wife, Lajjo.

Dabangg 3 is going to be released on December 20th 2019. It is directed by choreographer and actor/filmmaker, Prabhu Deva.

Salman has already begun production for his next movie, Radhe: Your most wanted bhai, co-starring Disha Patani. The movie will also be directed by Prabhu Deva. Its slated to be released in 2020. Sonakshi was recently seen in the historical drama, Kalank. Dabangg was intended as a stand alone movie, but the popularity of the characters has now made it into a successful franchise. Though the video of the song is yet to be released, you can listen to the audio below.