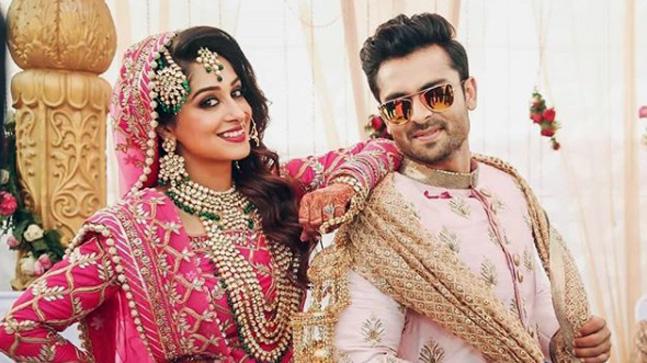 Stars of the popular TV show, ‘Sasural Simar Ka’ Shoaib Ibrahim and Dipika Kakar tied the knot recently. Pictures from the wedding and reception appear to suggest that the starry events were a grand success. They got married at a low-key wedding ceremony on February 22 in Shoaib’s native village Maudaha Hamirpur, UP. The wedding was a private affair, which took place in the presence of their close friends and family.

Dipika looked beautiful in golden lehenga, Shoaib, on the other hand, looked dapper in red and gold sherwani. There were posts where Shoaib played dhol and Dipika danced to his tunes. The couple also had a cake cutting ceremony. Several other videos and photos from the starry reception also surfaced on social media.

Dipika and Shoaib first met on the sets of Sasural Simar Ka but fell in love only after Shoaib quit the show in 2013. The couple announced their relationship in early 2016 and by 2017, they had finalized their wedding date.

Dipika left the show early last year, claiming she needed more time for her personal life. “Yes, it’s true. I’m leaving the show because I need some time off for my personal life. But I am refraining from talking about in at length because I don’t want anyone to feel and say that it’s some sort of a stunt to get a pay hike,” she had said. She currently appears on Entertainment Ki Raat.

In Pari – the movie, Anushka does wonders with considerably underrated genre
Kareena and Taimur turn cheerleaders for Saif as he plays gully cricket