The Election Commission (EC) will on Friday decide the fate of the biopic on Prime Minister Narendra Modi, which, the opposition has alleged, violated the model code of conduct, the poll panel said on Thursday.

During a press conference, Deputy Election Commissioner Sandeep Saxena said the poll panel has received responses from the producers of the film as well as from the Bharatiya Janata Party.

“Now the file is under examination and the matter is listed for tomorrow (Friday)… We will take the final call tomorrow,” he added.

After the release date of the film (April 5) was announced, opposition parties became restless and went to the Election Commission seeking a stay order on the film. EC sent a notice to the makers.

In answer to the notice sent by EC to the producers of ‘PM Narendra Modi‘, the makers said that postponing the movie will be “violation of freedom of speech and expression, and demeans the intellect of the electorate”.

The film which was scheduled to release on April 5, has been postponed for an indefinite time, producer Sandip Ssingh said on Thursday. 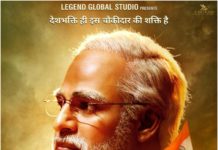