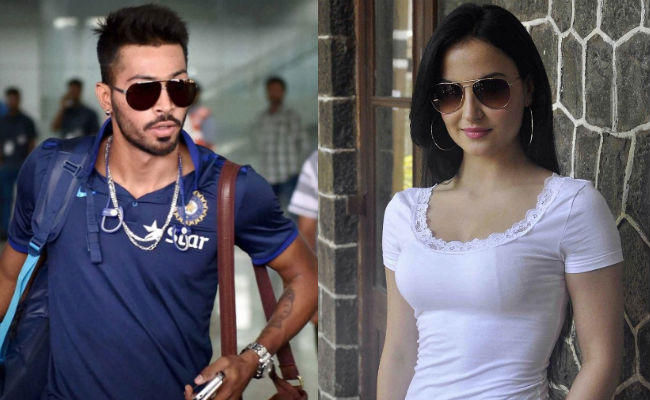 After Virat- Anushka’s grand wedding another cricketer is rumored of hooking up with a Bollywood diva. Indian team’s star cricketer Hardik Pandya is making news in both his professional and personal sphere. For quite a while the rumour of Hardik’s brewing affair with actress Elli Avram has been making the round. Elli in a recent interview talked about the rumours, neither accepting nor denying the affair.

In an interview with Hindustan Times, Elli responded on the affair saying, “Let them [people] be curious in life. Why do I need to clarify anything? By talking about these rumours, I’d just be giving more fodder for gossip [material]. Anyway, so many wrong things have been written over the years but I’ve never gone out and clarified [them]”. She also added, “Once you become a known face, people will follow you for gossip and news. But, we are not going to lock ourselves up. So, you can’t do much to stop these rumours”.

The rumours spread after Elli was seen tagging along the cricketer in his brother Krunal Pandya’s marriage. A lot of pictures with Elli along with Hardik circulated over the internet. When asked to clear the air, Elli resorted to the cliche that she “doesn’t want to talk about her personal life”.

Elli was also seen hanging out with the wives of Pandya’s co-cricketers and people easily joined the dots to conclude that something is surely cooking between the two. Shikhar Dhawan’s wife Aesha shared a picture on Instagram where Elli was seen enjoying with the ladies. Here’s a look-

Thanks to these wonderful ladies and gorgeous kids in helping me to celebrate Rhea’s 13th Birthday ???? We had a great time with many laughs, great food and even better company!!! Cheers to all!! ❤️???????????? @aliyah_dhawan @prithinarayanan @niks.vj @tanya_wadhwa @nupurnagar @radhika_dhopavkar @ritssajdeh @elliavrram

Elli however maintains that she has nothing to say on the topic as people would anyway not believe her word. She stated, “People have such strong mentality that no matter what I say [about Hardik], they will be like, ‘Oh, she is lying. We know the truth. She is hiding something’.”

Elli remains unaffected with such rumours, though. She shared, ” My dad has always taught me to ignore such things, and laugh at them as most of the times, these stories are absolutely cooked up”.

We don’t know how much truth does these conjectures hold but it’ll be interesting to see how things unfold hereafter.