Aamir khan in a recent interview, took “full responsibility” for the failure of his last release ‘Thugs Of Hindostan‘. He spoke to length about film’s failure and how he is still coping up with it. He also talked about his next project and movie which he was offered but had to refuse.

Interacting with media at the grand finale of 2nd edition of Cinestaan India’s Storyteller Script Contest 2018, Aamir talked about his next project ‘Mahabharat’, which is seven-episode long web series. It is also a mammoth project he is so consumed by that, he don’t have time for anything else. The actor will be flying to the USA to work on the script and other technicalities of the big budget epic.

The actor was present there with writers Juhi Chaturvedi and Anjum Rajabali. Anjum Rajabali offered the role of astronaut Rakesh Sharma to Aamir but due to his engagements with ‘Mahabharat’, he could not say yes. So the role went to Shah Rukh Khan. The movie was initially named ‘Salute’, which was later renamed to ‘Saare Jaha Se Achcha’. It is a space film.

“I have been very excited about the project. Like Aamir, I have been a big fan of Rakesh and now he is a good friend also. Frankly speaking, I was very keen that Aamir do it and he, at that moment, had liked it,” Anjum told reporters.

‘Saare Jahaan Se Accha’, will be directed by Mahesh Mathai and Ronnie Screwvala will produce the film, along with Siddharth Roy Kapur, under the RSVP films and Roy Kapur Films banners respectively 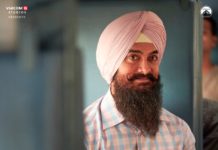